The baby who had been ripped from her slain mother’s womb was found alive and well in New Hampshire last night, and a woman was arrested in the grisly killing and kidnapping. Julie A. Corey, an acquaintance of 23-year-old homicide victim Darlene Haynes, was arrested after she was questioned late last night by authorities in Plymouth, N.H., police said. The baby girl was brought to a New Hampshire hospital, where she remained under evaluation. 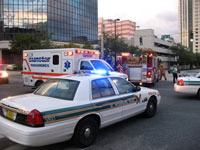 "We got the baby, and the baby appears to be in good health," Worcester Police Sergeant Kerry F. Hazelhurst said, reports Boston Globe.

According to Julie The Associated Press, Corey, 35, of Worcester, Mass., and a male companion were arrested in Plymouth, N.H., where police found them with the child. Corey was charged as a fugitive from justice and is to be arraigned in district court in Concord, N.H., on Thursday. She was in custody and could not be reached for comment late Wednesday, and Worcester police did not know whether she had a lawyer. Police in New Hampshire said the man was released.

Police discovered Haynes' body Monday, after neighbors complained about a stench. Haynes, 23, was found in the closet of a bedroom, wrapped in bedding. Police think she had been dead for several days. She was last seen on July 23, and Corey was one of the last people to see her, authorities said, informs CNN.