Turkey banned smoking in bars, restaurants and other closed spaces today, following the example of European Union countries including Italy, Ireland and the U.K. 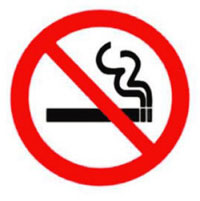 The ban, which came into effect at midnight, extends legislation that outlawed smoking in workplaces, shopping malls, schools and hospitals in May 2008, Bloomberg reports.

The ban in the nation of smokers came into effect despite protests from bar and coffeehouse owners who fear it will ruin businesses that have already been hit by the economic crisis.

"The country woke up this morning having carried out a cigarette revolution," an editorial in the newspaper Radikal read.

"Smokeless life has begun," was the headline on the Milliyet paper.

In Ankara's Sakarya street — famed for its fast food outlets, bars and beer halls — owners staged a brief protest saying many of the businesses there risked bankruptcy.

"We are good for the summer, as we can go outside, sit outside. But in winter it will be a problem," said Fatih Toprakkale, owner of Calcene hookah bar. "I am afraid that we may eventually have to close, which will be a shame as we employ about 15 people," The Associated Press reports.

Meanwhile recent surveys suggest that there is widespread public support of up to 95 percent for the smoking ban, but some smokers say the ban is excessive.

"I find the ban a bit extreme and Jacobinic... The state will never get people to quit smoking by banning tobacco use," Semsi Guler, a retired lawyer, said sitting outside a cafe in capital Ankara's Tunali district.

"People will now stay home to smoke to their liking," he added, AFP reports.