Spanish authorities found 13 bodies and 46 survivors Wednesday on a packed migrant boat near one of Spain's Canary Islands. 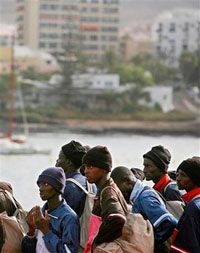 The Spanish Coast Guard spotted the boat shortly before 8 a.m. (0600 GMT) and escorted it to Puerto de Arguineguin on Gran Canaria Island, the Interior Ministry said.

Two of the migrants, who appeared to be from sub-Saharan countries, were taken to a hospital.

Every year thousands of Africans looking for a better life in Europe attempt treacherous journeys in overcrowded boats. Most are caught and hundreds more die along the way, either from exposure or by drowning.

The ministry said some migrants on Wednesday's boat told police they had set sail from the west African country of Guinea more than a week ago.

The number of those actually making it to the Canary Islands is down considerably this year because of stepped-up surveillance of African coastal waters.