A 10-member team of elite athletes and expert mountaineers hopes to do what search planes and satellite imagery couldn't - find Steve Fossett's body. 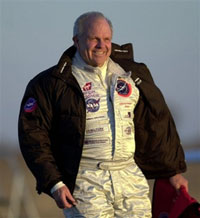 The multimillionaire adventurer was declared legally dead in February, five months after he was last seen taking off by plane from a remote Nevada ranch owned by hotel magnate Barron Hilton.

The search team led by geologist and adventure racer Simon Donato will focus on remote, wooded areas near where the 63-year-old Fossett was last seen - areas that could have concealed wreckage from the crews of the many private and military planes that searched last year.

"Whether we luck out and find the wreckage or not, at least our tracks will be preserved so that in the future if someone wants to give this a try they'll know where we already were and they can go to the next mountain range over," Donato said in a weekend interview at a base camp between the Bodie Hills and Sweetwater Mountains.

The search area, with peaks ranging from 10,000 (3,000 meters) to more than 11,000 feet (3,350 meters) in elevation, is just east of the even higher Sierra Nevada and about 110 miles (177 kilometers) south of Reno, Nevada. Because the area is close to Hilton's ranch, where Fossett was staying, Donato believes it's the best place to search.

Search team members, who are paying their own way, began arriving Friday to set up camp. The team will continue its efforts through this coming Friday and possibly Saturday, covering up to 20 miles (32 kilometers) a day depending on the terrain, Donato said.

Previous searchers provided maps and other detailed information on the harsh landscape. With planes and high-tech equipment, about 20,000 square miles (51,800 square kilometers) was covered from the air.

Some ground searches also were conducted, and thousands of amateur volunteers scoured high-resolution satellite photographs over the Internet of the rugged Nevada landscape where Fossett disappeared.

Donato considers Fossett, declared legally dead Feb. 15 by an Illinois judge, a hero to many people and dismisses speculation that his disappearance might have been staged.

"We're here on the premise that he did crash, unfortunately," he said. "I really respect him. He has done so much."

Donato, 31, won't be the only one looking for Fossett. In late August, Robert Hyman, a Washington, D.C., investor and alpinist, plans to bring in a team of up to 15 climbers, mountain guides and others with backcountry expertise to check an area just east of the section where Donato will search.

Hyman said he will focus in and around the Wassuk Range, dominated by 11,239-foot-high (3,425-meter-high) Mount Grant. When Fossett took off Sept. 3 from Hilton's ranch in a borrowed plane on what was supposed to be a short pleasure flight, he headed toward Lucky Boy Pass in the Wassuks.

The search area is so rugged that for some a continued search may seem hopeless. It has on occasion taken decades to find missing people and planes crashed in the area.

Fossett's widow, Peggy, issued a statement saying she's not involved in the latest search activity and has "no further plans for additional searching."