A prestigious South Korean university said Monday it is investigating the veracity of its researchers' recent claims to have successfully cloned wolves. 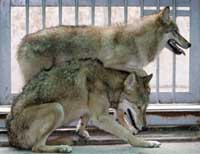 A Seoul National University research team led by Lee Byeong-chun, a former collaborator of disgraced stem cell scientist Hwang Woo-suk, is suspected of using erroneous data to inflate their claims of having created two cloned wolves, the university said in a statement.

The results - published in the journal Cloning and Stem Cells - also may contain false DNA information, the university said.

The university's Committee on Research Integrity has secured research samples from Lee's lab and will conduct separate tests at independent labs to verify whether the clones are genuine, the statement said.

The investigation can be concluded later this month, an official at the university's office of research affairs said on condition of anonymity, citing office protocol.

Lee, a veterinary professor, announced last month that his team had succeeded in cloning the two wolves, named Snuwolf and Snuwolffy, both born in October 2005.

Lee was a key member of Hwang's research team, whose purported breakthroughs in creating human stem cells through cloning were found to be fake. But the team's success in cloning the world's first dog, Snuppy, was confirmed.

Lee, who had been suspended from his university for three months over the stem cell scandal, was the main scientist in the dog cloning breakthroughs. He has been on trial, along with Hwang and other former team members, on charges of misappropriating research funds.