The study's authors looked at medical records of more than 120,000 children who visited doctors from 1980 through 2001. All were enrolled in a health maintenance organization that used an electronic medical record system and most came from middle-class families. 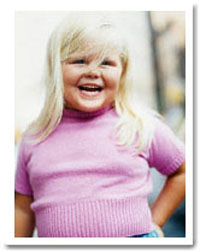 In infants under 6 months - a group Gillman said has seldom been included in weight studies - the prevalence of being overweight increased from 3.4 percent to 5.9 percent during the same period, a jump of more than 73 percent.

That worries Gillman because other studies have shown that accelerated weight gain in a child's early months can predict weight problems and higher blood pressure later in life.

For infants, Gillman said the study's authors looked more at change in weight over those first crucial months - especially weight gain out of proportion with length - rather than one's weight at a specific age, the AP reports.

Though the new study didn't look into what potentially caused the increase in the percentages of overweight babies, Gillman pointed to previous studies that have connected increased birth weights to gestational diabetes, a mother's excess weight gain during pregnancy and a mother's own high weight before pregnancy.

Dr. Laura Riley, a specialist in obstetrics and gynecology at Massachusetts General Hospital in Boston who was not affiliated with the study, said she hoped it would give doctors more ammunition in the push to get mothers to make healthier choices before, during and immediately after pregnancy.

Sara Keng, 29, a mother of three from Woonsocket, R.I., said she wasn't surprised by the study's results. She blamed the increase of overweight children on "super-sized" foods and on harried parents who rely on fast foods to feed their families.

Keng said she got a wake-up call when her oldest son, now 4, became overweight when he was a toddler, forcing her and her husband to change the family's eating habits. She said she thought the new study shouldn't drive parents to obsess over their newborn's weight.

But the new data could be even more evidence for parents and especially pregnant women that their actions can cause future problems - problems that Keng sometimes sees at the playground, she said as she held her 8-month-old son, Brycen, while her other children played in Boston Common.