A vaccine that blocks infection by the two types of human papillomavirus that cause most cervical cancer cases is safe and effective and should be approved, a U.S. government panel decided Thursday in a serious of unanimous votes. 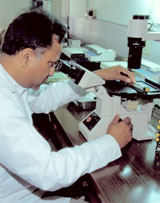 The vaccine, called Gardasil, could slash global deaths from cervical cancer by more than two-thirds if given to females as young as 9, according to its manufacturer, Merck & Co.

The FDA isn't required to follow the recommendations of its outside panels of experts, but usually does. Agency approval could come as soon as June 8.

HPV is the most common sexually transmitted disease, affecting more than 50 percent of sexually active adults. The cervical cancer it can cause kills each year roughly 290,000 women worldwide, reports AP.