US Researchers Preoccupied with Deep-Sea Volcano 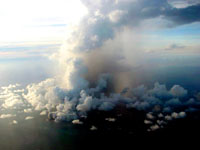 US Researchers Preoccupied with Deep-Sea Volcano

Scientists used a remotely operated vehicle named Jason to capture the event nearly 4,000 feet below the surface of the Pacific Ocean near Fiji, Tonga and Samoa, the Woods Hole Oceanographic Institution in Falmouth, Mass., said in a release.

Scientists in a control van on a research ship guided Jason to within 10 feet of the erupting volcano to collect samples of rocks, hot spring waters and biological specimens, expedition leader Albert Collasius said.

"There were 15 exuberant scientists in the control van who all felt like they hit a home run," Collasius said.

Through a fiber optic tether, Jason transmitted high-definition video of the eruption as it occurred during the first week of May. The video was shown publicly for the first time at this week's meeting of the American Geophysical Union in San Francisco.