Atlantis' astronauts anxiously awaited news on the birth of one crewman's child Friday, as they moved more supplies into the International Space Station and geared up for another spacewalk. 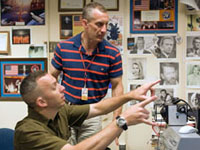 Astronaut Randolph Bresnik was about to become a father for the second time. His wife, Rebecca, was due to give birth to a baby-girl Friday back home in Houston.

Bresnik, 42, a lieutenant colonel in the Marines, was keeping close tabs on everything and hoped to be in contact by phone for the big event.

Another NASA astronaut — Mike Fincke — was on the space station when his second child, also a girl, was born in 2004.

As for celebrating, Wilmore said no cigars will be passed around — "maybe some chewing gum." Smoking is prohibited aboard NASA spacecraft for obvious safety reasons.

Mrs. Bresnik, like her husband, works at Johnson Space Center. She is the lead attorney for international law there. The astronaut said before rocketing into orbit Monday that if he had to miss the birth, "this is a pretty good excuse and hopefully she'll forgive me for it later on."

The 12 space travelers got some extra moving time Friday. That's because Atlantis was declared free of any worrisome launch damage Thursday, with no further inspections needed until after the shuttle's departure.

The two crews also spent the day gearing up for the second spacewalk of their mission. Bresnik and Michael Foreman will venture out Saturday to work on the space station.

Atlantis — which delivered tons of spare parts and equipment — will remain at the space station until the day before Thanksgiving. The holiday will be filled with landing preparations.

Shuttle commander Charles Hobaugh said he doesn't have anything "scripted" for Thanksgiving dinner and will make do with whatever is left in the pantry. "I guarantee you we're going to have a fabulous time, one way or another," he said.