Windows 7 to Be Released by End of October

Microsoft's latest operating system Windows 7 is to be released on 22 October. It is described as a significant improvement over Vista. The new software is architecturally similar, the analyst firm said, and should allow for a fairly smooth upgrade. 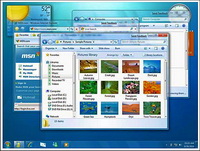 Windows 7 to Be Released by End of October

"Windows 7 has improvements in memory management to allow users a better experience than with Vista on PCs with similar or even slightly lower specifications," said Michael Silver, vice president and distinguished analyst at Gartner.

"It adds other features of interest to organisations, as well as to consumers. It is important for Microsoft to get off to a good start with Windows 7 to build momentum and put the problems of Vista behind it.

It was also reported, Microsoft Netherlands is releasing 777 copies of Windows 7 to people who live in the small town of Zevenhuizen, which literally translates to "Seven Houses." They will be getting an English-language copy of Windows 7 Ultimate with a license code valid for one Windows PC. In fact, one of the requirements is that you must be in possession of a PC with Windows as the primary OS; those using mainly Mac OS or Linux can't participate. Another requirement is that the PC gets a green light from the Windows 7 Upgrade Advisor. Microsoft employees and those under 18 years of age not included.

Zevenhuizen residents must opt in over at zevenhuizengaatover.nl. The site explains that there are four options to choose from for getting Windows 7. Microsoft is also offering to back up files (but not software) and to install Windows Live programs as well as Microsoft Security Essentials. Users are on their own for reinstalling their other applications.

Signup on the actual website ends tomorrow, though signup in person is possible till Tuesday, October 20. Actual Windows 7 installs will take place from October 17, 2009 to October 23, 2009, meaning these residents have the option to get the operating system early; much like those who choose to buy PCs from small custom PC makers as of earlier this week, Ars Technica reports.

Meanwhile, near-term Apple marketing plans will revolve around countering Windows 7, says the company's senior marketing VP, Phil Schiller. "It presents a very good opportunity for us," he explains, noting that many PCs are still equipped with Windows XP, and will thus require a more elaborate upgrade to carry over files to 7. This can include backing up essential files, reformatting, and/or reinstalling old applications. "Any user that reads all those steps is probably going to freak out," claims Schiller. "If you have to go through all that, why not just buy a Mac?"

The VP's view is expected to transform into an ad campaign, which may also continue threads attacking the Windows virus threat, and promising better support for iPods and iPhones. Schiller may be backed by third-party analysts, who point out that Mac sales tend to spike in tandem with major Windows launches. Windows 7 has proven unusually popular with pre-release testers however, and is expected to reinvigorate PC sales amongst people who avoided Vista, MacNN reports.