Swine Flu Could Strike Up to 40 percent in 2 years

U.S. health officials say swine flu could strike up to 40 percent of Americans over the next two years and as many as several hundred thousand could die if a vaccine campaign and other measures aren't successful. 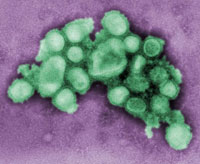 Swine Flu Could Strike Up to 40 percent in 2 years

Those estimates from the Centers for Disease Control and Prevention mean about twice the number of people who usually get sick in a normal flu season would be struck by swine flu. Officials said those projections would drop if a new vaccine is ready and widely available, as U.S. officials expect, The Associated Press reports.

Getting a vaccine approved as soon as possible is important, the U.S. Food and Drug Administration's Dr. Wellington Sun told a committee of experts who advise the FDA on vaccine policy.

"Time is really not on our side," Sun said.

"The 2009 H1N1 pandemic is a declared national emergency. The severity of disease seems comparable to seasonal" influenza, Sun added. But it could change, he said, and "We have to prepare for the worst," informs Reuters.

The order is sufficient to vaccinate around one third of the population to follow World Health Organization recommendations to vaccinate particular groups, such as people with asthma or chronic health conditions as well as healthcare professionals, said the ministry, which is currently chairs the conference of federal and state health ministers, Wall Street Journal reports .