A lawsuit filed today in U.S. District Court for the Eastern District of Texas in Marshall names comatose former Dallas Cowboys running back Ron Springs as one of the eleven plaintiffs challenging the constitutionality of the state of Texas 's per person-cap of $250,000 that can be awarded for non-economic damages as a result of medical malpractice. 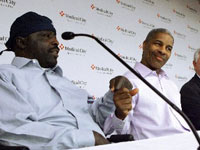 In January, Miller Curtis & Weisbrod, LLP, a Texas law firm that specializes in medical malpractice and catastrophic injury litigation, filed a medical malpractice lawsuit in state court in Dallas County on behalf of Springs seeking actual, punitive, and exemplary damages against an anesthesiologist and a plastic surgeon.

"Fundamental constitutional guarantees protect injured patients who prove they were injured as a result of another's negligence from having the legislature impose a second injury on them by taking away their right to compensation," said attorney Robert S. Peck, president of the Center for Constitutional Litigation, a Washington, D.C. law firm that has successfully challenged similar laws in other states. "The Texas legislature has no authority to sit in judgment in individual cases and dictate the outcome, no matter how much their political patrons and special interest lobbyists might want them to do so."

Springs and the other plaintiffs in the federal action are challenging the validity of the 2003 Medical Malpractice and Tort Reform Act (H.B. 4), which limits awards in Texas to $250,000 per plaintiff in cases of medical malpractice. They base their challenge to the state law on the First, Fifth, Seventh and Fourteenth Amendments of the U.S. Constitution.

"This odious Texas law must be challenged. It limits non-economic damages to $250,000 in each case of medical malpractice -- no matter how many people were injured or died or how many people suffered," said Les Weisbrod, Miller, Curtis & Weisbrod partner. "Doctors are placed above the dictates of the U.S. Constitution, allowing them to have special legal protection from the consequences of their medical mistakes."

The plaintiffs in this challenge include a group of current and former Texas residents, each of whom is seriously injured due to medical malpractice, who argue that without the state award cap in place, the facts of their cases would prompt Texas juries to award non-economic damages far greater than $250,000.