By Anastasia Tomazhenkova: A disfiguring skin disease has affected more than 200 children in southern Iraq in an outbreak that some health officials are blaming on the war's devastating effect on the nation's public health system. 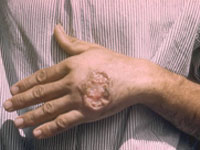 In Iraq's southern province of Qadissiyah about 275 children have been struck with leishmaniasis, a disfiguring disease spread by sandflies.

An epidemiologist at the World Health Organization's Iraq office Dr. Omer Mekki claimed "This is a killer disease and we are trying to stop its spread as soon as possible".

Two types of leishmaniasis have been found in southern Iraq, according to Mekki: 212 cases of cutaneous leishmaniasis, also known as Baghdad boil disease, and 63 cases of visceral leishmaniasis, or kala azar, Hindi for black fever.

Cutaneous leishmaniasis is not fatal, but can cause up to 200 facial lesions and crater-shaped sores, leaving patients seriously disfigured. Kala azar can kill, and causes fever, weight loss, anemia, and swelling of the spleen and liver.

Children are particularly at risk because they typically have weaker immune systems than adults. A single sandfly bite can be enough to transmit the disease.

Mekki said WHO is working with the government to conduct insecticidal spraying campaigns to kill the sandflies. He added that cases of leishmaniasis have dropped substantially since 2004, but progress eliminating the disease in Iraq has been slow.

The incubation period can be up to six months, and some suspect the reported number of cases may be an underestimate. Patients are treated with a course of injections, which costs about 40 dollars.

Since the conflict began, hundreds of U.S. soldiers have also been infected and scarred by leishmaniasis.

Though the disease was first identified in Iraq more than a century ago and has long been present in the country, outbreaks were rare under Saddam Hussein. But since the conflict began, experts say the destroyed health system has allowed viruses lurking in the environment to return.

Experts are worried about a further spread of the disease. Contributing factors include crowded living conditions in southern Iraq, where there is difficult access to clean water, and plenty of stagnant pools of water for flies to breed. The peak transmission season for leishmaniasis typically does not begin until May.

"The war has exacerbated the problems in Iraq that are one or two decades old," said Claire Hajaj, a spokeswoman for UNICEF's Iraq office. "Their health system has been undermined by violence, insecurity and sabotage." UNICEF is working to repair sanitation plants in the south, the region of the country with the worst access to clean water.

Leishmaniasis also surged in Afghanistan after decades of civil war and the U.S. invasion. Though data about the historical number of cases are sketchy, experts say Afghanistan now has about 200,000 cases per year.

In Iraq, WHO officials estimate there are nearly 3,000 leishmaniasis cases per year. But in neighboring Jordan, there are only about 300 cases annually.

With few health care facilities functioning in the ongoing conflict, experts suspect other diseases may also be simmering in the background.

"Leishmaniasis has been identified because it causes lesions and it's an obvious disease when it occurs," said Simon Croft, a professor of parasitology at the London School of Hygiene and Tropical Medicine. "But there could be other things going on that are not as noticeable, like bacterial diseases."

Given the unstable security situation in southern Iraq, experts are unsure how long it might take to contain the current leishmaniasis outbreak.

"Disease control will come with the return of stability," Croft said. "But at the moment, Iraq has other priorities to deal with."