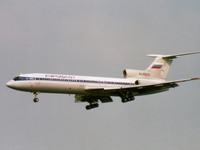 The Tu-154 jet, en route to the Russian enclave of Kaliningrad, first crossed into Estonian airspace in the vicinity of the island of Naissaar, some 10 kilometers (6 miles) north of the capital Tallinn late Monday, military officials said in a statement. The violation lasted four minutes, they added.

The same plane re-entered the Baltic nation's air space a little later this time for about one minute near the western island of Osmussaar, the military said.

Estonian air traffic controllers failed to establish contact with the plane, and officials notified the incident to a NATO air operation center in Germany.

Estonian-Russian relations are at a low after the Baltic state angered Russia by removing a Soviet war statue from downtown Tallinn. The decision triggered a massive cyber-attack, orchestrated in Russia, against Estonian government and commercial Web sites.

Military spokesman Lt. Andres Sang was unable to say whether the plane was on a military or a civilian mission, though he said the Tu-154 was originally built as a passenger aircraft.

The Soviet-made Tu-154 is widely used in Russia and in many former Soviet republics.

The incident was the latest in a series of Russian violations of Estonian airspace since the Baltic country joined NATO in 2004.

The region of Kaliningrad is sandwiched between NATO-members Lithuania and Poland, forcing Russia to provide air service from St. Petersburg through a tight air corridor above the Baltic Sea.