Pakistani journalists in Karachi get envelopes with threats

Unmarked envelopes, each containing a single bullet, were placed by the cars of three journalists in Karachi, the latest threat against Pakistan's independent media. 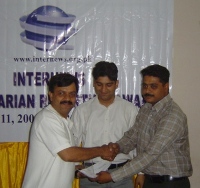 Pakistani journalists in Karachi get envelopes with threats

City police chief Azhar Faruqi said they were investigating who was behind the anonymous threats made outside the Karachi press club late Tuesday.

The incident came days after a list of 12 Pakistani journalists labeled "enemies" was issued in the name of an organization linked to a party that supports President Gen. Pervez Musharraf.

The designations by the Muhajir Rabita Council appeared to be linked to the journalists' coverage of violence in Karachi on May 12. Some 41 people were killed and dozens wounded in gunbattles and riots when competing groups attempted to stage demonstrations over Musharraf's suspension of Pakistan's top judge.

The Mutahida Qaumi Movement, or MQM a Karachi-based party allied with Musharraf and a partner in the provincial government has been accused of initiating much of the violence.

Farooq Sattar, a senior MQM leader, denied any part in the threats.

"We respect journalists," he told reporters in Karachi. "Those who threatened journalists have nothing to do with us."

Information Minister Mohammed Ali Durrani said authorities were taking the threats "very seriously." He claimed the threats could be intended to malign the government as it had championed freedom of the press in Pakistan.

Musharraf urged the media to be balanced in its reporting, saying in a speech Wednesday to the armed forces that some television networks have become politicized to the point that they are violating their code of conduct by pressuring the Supreme Court to rule in favor of the chief justice's appeal of his suspension.

The military issued a statement quoting Musharraf as saying that "spreading despondency and negativism" would hurt the country.

Shamim ur-Rahman, president of the Karachi Union of Journalists, linked Tuesday's threats to the list issued in the name of the Muhajir Rabita Council and demanded protection for journalists which police said they would provide.

He said the government was "harassing journalists who are performing their professional duties with objectivity."

More than 200 people, many of them members of the Karachi Union of Journalists, rallied in a street near the press club to protest the threats.

"This is an attempt to put restrictions on the freedom of journalists and we will strongly resist it," Ur-Rahman said at a meeting of journalists before the rally.

Black flags will be flown on the press club building until "those involved in giving threats to journalists are arrested," he said.

Media rights groups have voiced growing concern over intimidation of journalists in Pakistan amid political turmoil sparked by Musharraf's suspension of the chief justice in March that has led to mass protests by opposition parties and lawyers.

At least two private TV networks at the forefront of coverage of the unrest have been attacked, and a senior local journalist said he was dragged from his car and beaten by intelligence agents in Islamabad.

Earlier this month, the New York-based Committee to Protect Journalists named Pakistan among the world's 10 worst backsliders on media freedom.