The former top general in charge of Marines in Iraq's Al Anbar province when 24 civilians were killed is set to testify in the biggest U.S. criminal case involving civilian deaths in the Iraq war. 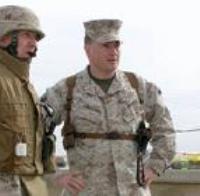 Maj. Gen. Richard A. Huck planned to testify Thursday by video link from the Pentagon in a preliminary hearing for Capt. Randy W. Stone, one of four officers charged with dereliction of duty for failing to investigate the killings. Three enlisted Marines are also charged with murder.

Huck, who works in the Pentagon as assistant deputy commander of plans, policies and operations, was commander of the 2nd Marine Division at the time of the Nov. 19, 2005 killings. Stone's attorney, Charles Gittins, has called him to testify.

Gittins wants to show Stone did nothing wrong because Marines throughout the command chain knew about the killings but agreed not to order an investigation because the deaths were deemed to have been lawful.

Court documents show that Huck was briefed about the killings soon after they occurred and they did not seem suspicious to him. Huck told investigators that "no bells and whistles went off."

"It was just here is something that happened, and it was onto the next thing," Huck told investigators.

Thursday marks the third day of Stone's hearing. On Wednesday, a Marine sergeant testified that his squad leader shot five Iraqi men as they stood with their hands in the air and then told comrades to lie about it.

Sgt. Sanick P. Dela Cruz said that in the moments after a roadside bomb hit a Humvee in his convoy on Nov. 19, 2005, he saw five men standing by a white car with their hands interlocked behind their heads. The squad leader, Staff Sgt. Frank Wuterich, then fired about six to eight rounds at the men, Dela Cruz testified.

"They were just standing, looking around, had hands up," Dela Cruz said. "Then I saw one of them drop in the middle. I didn't know what was going on, sir. Looked to my left, saw Staff Sergeant Wuterich shooting."

After the five men died, a Marine fireteam led by Wuterich cleared two houses with grenades and gunfire in an effort to find insurgents. The dead included women, children and elderly people.

Wuterich's attorney Neal Puckett said in a phone interview that Dela Cruz's account was false and that the Marine had given investigators up to five different versions of events.

Dela Cruz initially was charged with murder, but prosecutors dismissed charges against him last month. He has been given immunity to testify.

Stone, 34, of Dunkirk, Maryland, had only been in the Marine Corps about year and was sent to Iraq a few weeks before the killings.