Drug dealers are mixing their wares with over-the-counter pain remedies and other familiar products even candy and peddling them under non-threatening names. 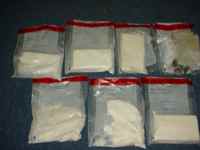 One such concoction, a blend of black tar heroin and Tylenol PM that goes by the name "cheese," has been linked to the deaths of 19 teenagers in Dallas, including two 15-year-olds.

"If you're a drug dealer you have to target a new audience all the time," said Garrison Courtney, a U.S. Drug Enforcement Agency spokesman. "It's Marketing 101 for drug dealers."

Examples of the drug-mixing strategy also include candy laced with marijuana and, in several states, flavored methamphetamine. In Arkansas recently, a mix of meth and strawberry-flavored powder normally used to create a children's milk drink turned up under the name "Strawberry Quick."

"They're calling it 'cheese,' they're not calling it 'heroin,"' said Dr. Collin Goto, a toxicologist at Children's Medical Center Dallas. "It becomes much more appealing to younger kids because it doesn't have the stigma, they're not as afraid to get started."

Dallas school district police first became aware of the heroin-mixing trend in 2005, and its become a disturbing local phenomenon since.

"Cheese is just a different makeup for mixing with heroin, but it's still heroin," said Dr. Jeffrey Barnard, chief medical examiner for Dallas County. "It's the heroin that's the problem."

Beyond the innocuous name, several other factors appear to be driving the popularity of cheese. Kids often buy the drug from other kids. It is affordable, selling for about $2 (EUR1.48) a dosage. And it is snorted rather than injected.

During the 2005-06 school year, the Dallas school district police arrested 90 students for possession of the heroin-Tylenol PM mixture. The number has soared during the current school year. Through February, 122 have been arrested. The average age of those arrested: 14.

"The resurgence of heroin in society in 11- to 16-year-olds that's unprecedented," said Julian Bernal, deputy chief of narcotics for the Dallas police, who makes six to 12 arrests a month for possession of cheese heroin.

"Hopefully we can try to contain it," said Dr. Sing-Yi Feng, another toxicologist at Children's Medical Center Dallas. "The concern is that the stuff is pretty cheap. It's easy to use."

Experts say cheese usually has about 2 percent to 8 percent heroin mixed with the Tylenol PM which contains acetaminophen and diphenhydramine or similar over-the-counter drugs.

Gary Hodges, deputy chief of the Dallas school district police, said cheese arrests in the district have nearly equaled those for marijuana, still the leading substance involved in drug arrests.

Authorities say they are just now beginning to understand how widespread the mixture has become and the toll it is taking on Dallas area youth. Even the exact number of cheese heroin-related deaths was not known until The Dallas Morning News analyzed medical examiner records and published the results last month.

"Basically, it flew under the radar screen," said Zachary Thompson, director of Dallas County Health and Human Services and a member of the Dallas County task force on cheese.

Most of the victims are male, and involve nearly equal numbers of white and Hispanic youth.

Dave Cannata's 16-year-old son, Nick, died in June 2005, with heroin and diphenhydramine in his system. Nick Cannata, who had been in rehab for a drug problem the summer before, was found dead in his bed in Coppell, just outside of Dallas.

He had spent the day building a deck with his father before going to a friend's house. Dave Cannata said he knew something was wrong when his son returned home that night, but he decided to delay a confrontation.

"If I had to do it over again, I wouldn't hesitate to pick up the phone and call 911," said Cannata. "It's alarming the epidemic proportion of kids that are messing with this stuff."

Olga Sanchez agrees. She thought her 15-year-old son had stopped using the mixture. But this spring, Oscar Gutierrez's brother found the eighth-grader at a Dallas middle school dead in bed.

"He was very purple. He was very cold, cold," said Sanchez, who had been attending drug counseling with her son since discovering his cheese habit last fall.

"I would like for kids to realize that lots of other kids have died, that they should look for help, that they could lose their life," she said.