Prosecutors charged a recently fired accountant with murder in the shootings of three former co-workers at their office. 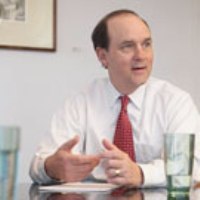 Anthony LaCalamita III was expected to be arraigned later Wednesday in Monday's shootings at Gordon Advisors in the affluent town of Troy. The Oakland County prosecutor's office issued a warrant, charging LaCalamita, 38, with first-degree murder in the death of Madeline Kafoury, a receptionist.

He also is charged with two counts of intent to murder in the shootings of the accounting firm's partners Paul Riva and Alan Steinberg, three counts of possession of a firearm in the commission of a felony and one count of fleeing and eluding police.

Troy police Lt. Gerry Scherlinck said Riva and Steinberg appeared to have been targeted in the shootings.

LaCalamita was fired last week from his position as a general accountant at the firm. Scherlinck said investigators still were looking into the reason for the firing.

Scherlinck said LaCalamita bought a shotgun and shells Friday. Police found a box consistent with one that would hold a shotgun, as well as empty shell boxes, in a garbage container outside LaCalamita's apartment Monday evening, Scherlinck said.

LaCalamita was arrested Monday afternoon after leading police on a highway chase at speeds of up to 120 mph (193 kph). A 12-gauge pump-action shotgun and three shells were found in the car he was driving, police said.

Matthew Roth, executive staff attorney for the prosecutor's office, said his office had not been told if LaCalamita or his family had retained a lawyer.

LaCalamita is married, but his wife, Michele, released a statement saying they had been separated for about three weeks.