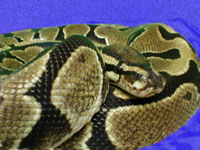 A pet python strangled its 69-year-old owner in southern Vietnam, despite his daughter-in-law's desperate efforts to save him, police said Tuesday.

His daughter-in-law heard him struggling in the yard and discovered Ho with the python wrapped around his neck. She tried to pull it off, but the creature was too strong, the AP reports.

Ho had raised and cared for the python, which are common in southern Vietnam, at his home in the town of Ha Tien, for 10 years.

In Vietnam, some snakes and other wild animals are considered delicacies. It is also widely believed that they can help to cure health problems.