A former Russian spy allegedly poisoned with a toxic metal has been transferred to an intensive care unit in London after his condition deteriorated, hospital officials said Monday. 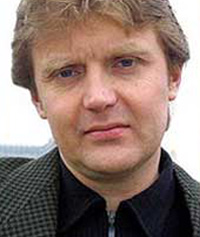 Col. Alexander Litvinenko, a former KGB and Federal Security Service agent, was under armed guard at a London hospital, where he is fighting for his life after apparently being given the deadly poison thallium.

Litvinenko "remains in a serious condition, but last night there was a slight deterioration in his condition, and he was transferred to intensive care as a precautionary measure," University College Hospital said in a statement.

Litvinenko, who had been looking into the killing of Russian investigative journalist Anna Politkovskaya, told reporters last week that he fell ill on Nov. 1 following a meal at a sushi restaurant with an Italian contact who claimed to have details about the murder.

Alexander Goldfarb, who helped Litvinenko defect to Britain in 2000, said the former spy told him more details on Monday morning about the day he was poisoned during a telephone conversation from his hospital bed.

Goldfarb said all options should be explored, including whether the poison might have been sprinkled into Litvinenko's drink during a meeting at a central London hotel on Nov. 1 before he went to the sushi restaurant.

Litvinenko briefly met two men from Moscow - one of whom was a former KGB officer he knew - for tea at the hotel, Goldfarb said.

"I called Alexander in hospital ... he told me it is true, on that day, before meeting the Italian, he met with two Russians," Goldfarb said, adding that Litvinenko had not previously met the second man.

Litvinenko told police about the two men, he said.

Oleg Gordievsky, a former senior KGB agent who defected to Britain in the mid-1980s, alleged in an interview with The Times newspaper that those who tried to kill Litvinenko would have had to have obtained permission "from the top" for the operation.

Gordievsky alleged the attack was carried out by a former agent who was recruited from prison by the KGB's main successor agency, FSB, the newspaper reported.

Police said a specialist crime unit began an investigation Friday into how Litvinenko may have been poisoned. No arrests had been made, said a Scotland Yard spokesman, speaking on condition of anonymity in line with force policy.

Earlier on Monday, Goldfarb told British Broadcasting Corp. radio that the former agent was poisoned because of his opposition to the Russian regime.

"It's very difficult to imagine the president's ordered the killing, it's true, and nobody's saying that (Russian President Vladimir) Putin personally ordered it, though it's very likely," Goldfarb said.

Britain's Press Association identified the Italian contact he met at the restaurant as Mario Scaramella, an academic who has helped investigate KGB activity in Italy during the Cold War. Scaramella could not immediately be reached for comment.

Politkovskaya, who had written critically about abuses by Russian and pro-Moscow Chechen forces fighting separatists in Chechnya, was gunned down Oct. 7 inside her Moscow apartment building. Her attackers have not been found.

A doctor treating Litvinenko told the BBC that tests showed he had been poisoned by thallium - a toxic metal found in rat poison.

Dr. John Henry, a clinical toxicologist who treated Ukrainian President Viktor Yushchenko when he was poisoned by dioxin during his 2004 presidential election campaign, told the BBC that thallium can cause damage to the nervous system and organ failure, and that just one gram can be lethal.

Kremlin critics claim poisoning - which is extremely hard to prove - is a common Soviet-era practice that seems to have reappeared since Putin, an ex-KGB officer, became president.

Litvinenko joined the KGB counterintelligence forces in 1988, and rose to the rank of colonel in the FSB. He began specializing in terrorism and organized crime in 1991, and was transferred to the FSB's most secretive department on criminal organizations in 1997, the AP says.

He fled Russia and claimed asylum in Britain in November 2000.