A girl was found alive underneath the rubble of Colegio Enrique Rebsamen School in Mexico City.  Rescuers could not retrieve the girl yet, but they managed to give her water and food. 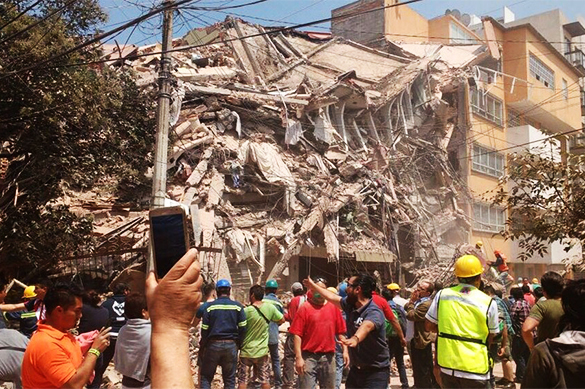 More than 500 servicemen, 200 policemen and volunteers remove the rubble on the site of the school building.

The powerful earthquake in Mexico has caused serious damage to 209 schools, 15 of them have been completely destroyed.

The death toll from the earthquake is expected to climb as rescuers work to remove the rubble. The earthquake caused serious damage to many buildings in Central Mexico. Dozens of buildings collapsed across the country, including churches, in which parishioners were at the time of the earthquake. Fifteen people were killed during a service in a church near Popocatepetl Mount. The earthquake also caused the volcano to erupt, although the eruption was insignificant.

According to the authorities, at least 3.8 million people were left without electricity.

The seismic centre of the earthquake was located near the city of Atensingo in the State of Puebla, about 120 kilometres from Mexico City, at a depth of 51 kilometres. The earthquake struck at the time when rescue services of Mexico City were holding exercises to combat consequences of such disasters. Amazingly, the quake struck on the 32nd anniversary of another powerful earthquake in Mexico, which killed about 10,000 people.