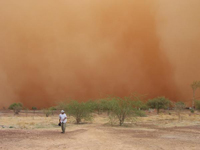 The dust blacked out the outback town of Broken Hill on Tuesday, forcing a zinc mine to shut down, and swept 1,167 km (725 miles) east to shroud Sydney in a red glow on Wednesday.

By noon on Wednesday the storm, carrying an estimated 5 million tonnes of dust, had spread to the southern part of Australia's tropical state of Queensland.

Dust storms in Australia are not uncommon but are usually restricted to the inland. Occasionally, during widespread drought, dust storms reach coastal areas. Australia is the driest inhabited continent and only Antarctica is drier.

Australia is battling one of its worst droughts and weather officials say an El Nino is slowly developing in the Pacific which will mean drier conditions for eastern states.

The country is one of the most vulnerable nations to climate change, but also the world's biggest greenhouse gas emitter per capita as it relies on coal-fired power stations for the bulk of its electricity.

Scientists are reluctant to directly link climate change with extreme weather events such as storms and drought, saying these fluctuate according to atmospheric conditions, but green groups link the two in their calls for action, accoding to The Washington Post's report.