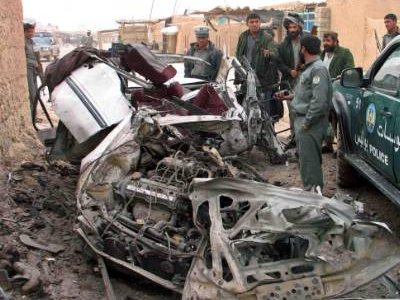 A blast occurred in a residential area near the Supreme Court of Afghanistan in Kabul, a witness said. At least 16 people were killed, including international soldiers, and 55 were wounded. Authorities said, a car bomb rocked parts of Afghanistan's capital Thursday.
At least six Italian soldiers were killed and four others were wounded in the blast, Ignazio La Russa, Italy's defense minister said.
Ten Afghan civilians were also killed, said Fareed Rayel, an Afghan Ministry of Public Health spokesman.
Ministry of Interior spokesman Zamarai Bashiri said 21 shops, seven vehicles, five motorbikes and three bicycles were damaged in the explosion.
The soldiers were traveling on Airport Road in Kabul when they were targeted by a suicide car bomber, the defense minister said.
Afghan military ambulances were taking bodies away and at least three U.S. military vehicles were seen driving toward the scene of the blast, The Associated Press  reports.
It was also reported, in a separate incident, a service member with the NATO-led forces in Afghanistan was killed in southern Afghanistan, military officials said Thursday.
The victim died Wednesday after after being struck by a roadside bomb, the International Security Assistance Force said.
"On behalf of the men and women serving with ISAF, I convey my deepest sympathies to the loved ones of this brave soldier," said Brigadier-General Eric Tremblay, ISAF spokesman. "His selfless efforts to bring hope to the population of Afghanistan will not be forgotten," CNN reports.
Meanwhile, the Italian Government today vowed to maintain its military presence in Afghanistan, despite the attack. Football matches and other sporting events this weekend in Italy will observe a minute's silence.
The Taleban claimed responsibility, identifying the suicide bomber as a man named Ayatulla, who they said had waited in his bomb truck until the convoy passed next to him in the slow-moving traffic.
Witnesses said that a number of Afghan civilians were also killed, including a man and his wife who had been out shopping for new clothes for the Muslim holiday of Eid, which marks the end of the fasting month of Ramadan, Times Online reports.