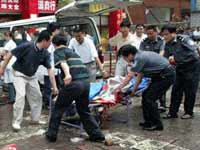 The attack in Xinjiang province was in an area where local Muslims have waged a sporadic rebellion against Chinese rule.

It came just four days before the start of the Beijing Olympics - an event that at least one radical Muslim group has vowed to attack.

The brief Xinhua account said the attackers drove the dump truck to get inside the paramilitary police compound in the Kashgar area and then exploded two grenades. A state television report gave a different version, saying the police were attacked while marching in front of a hotel while conducting morning drills.

Besides the 16 dead, another 16 armed policemen were wounded, the reports said.

The exact location of the attack could not immediately be determined. Kashgar, or Kashi in Chinese, is the name of an oasis town that was once a stop on the Silk Road caravan routes and is also the name of the surrounding region that abuts Pakistan, Afghanistan and Kyrgyzstan.

A local Turkic Muslim people, the Uighurs (WEE'-gurs), have chafed under Chinese rule, fully imposed after the communists took power nearly 60 years ago. Occasionally violent attacks in the 1990s brought an intense response from Beijing, which has stationed crack paramilitary units in the area and clamped down on unregistered mosques and religious schools that officials said were inciting militant action.

Chinese defense and police commanders have warned that radical Uighurs fighting for what they call an independent East Turkistan in western China pose the single greatest threat to the Olympics.

In recent months police claimed to have foiled a plot to explode a Chinese passenger plane and plans by terrorist cells to kidnap athletes, journalists and others involved in the Olympics.

One militant group, the Turkistan Islamic Party, pledged in a video that surfaced on the Internet last month to "target the most critical points related to the Olympics." The group is believed to be based across the border in Pakistan, with some of its core members having received training from al-Qaida and the Pakistani Taliban, according to terrorism experts.

Terrorism experts and Chinese authorities, however, have said that with more than 100,000 soldiers and police guarding Beijing and other Olympic co-host cities, terrorists were more likely to attack less-protected areas.