By Anastasia Tomazhenkova: Las Vegas authorities do not believe that substance found at a Las Vegas motel may be the highly toxic ricin and that it was intended for a terrorist attack. Lab tests on the substance were pending and seven people were taken to hospitals as a precaution. 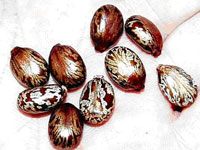 "This event does not appear to be terrorism related," FBI spokesman Richard Kolko. Kolko said the FBI was assisting local police in the investigation.

Police were called to the Extended Stay America Motel on Thursday and retrieved a package from the motel manager that was determined to be a chemical or controlled substance, Officer Ramon Denby said.

Two preliminary tests indicate it contained ricin, Denby said. Results from further tests by the Centers for Disease Control and Prevention and a second local lab are expected later Friday, he said.

The man who brought the substance to the manager told police he found it in a suite and it did not belong to him, police Capt. Joseph Lombardo said at a news conference Thursday night. Lombardo did not identify the man.

Police cordoned off the area and isolated the room where the substance was found.

Three motel employees and another person were quarantined and decontaminated at the site, then taken to hospitals for further testing, Denby said. All appeared to be in good condition, he said. Three police officers who had been exposed were also taken to hospitals.

Someone exposed to ricin shows signs of contamination in six to eight hours, Denby said.

Homeland Security officials joined local police in the investigation. Officials from the FBI, Las Vegas Health District, a hazardous materials team and the National Guard were also at the scene.

The motel is several blocks west of the Las Vegas Strip.

The protein ricin is a toxin extracted from the castor bean. Ricin has an average lethal dose in humans of 0.2 milligrams. As little amount as a pinhead can kill an adult.

Ricin is poisonous if inhaled, injected, or inqested, acting as a toxin by the inhibition of protein synthesis. Ricin is 6000 times more toxic than cyanide and 12000 times more poisonous than rattlesnake venom by weight.

While there is no known antidote, the US military has developed a vaccine. Symptomatic and supportive treatment is available. Long term organ damage is likely in survivors. Ricin causes severe diarrhea and victims can die of shock.

Ricins may have therapeutic use in the treatment of cancer. Ricin could be linked to a monoclonal antibody to target malignant cells recognized by the antibody. Genetic modification of ricin is believed to be possible to lessen its toxicity to humans, but not to the cancer cells. A promising approach is also to use the non-toxic B subunit as a vehicle for delivering antigens into cells thus greatly increasing their immunogenicity. Use of ricin as an adjuvant has potential implications for developing mucosal vaccines.