By Anastasia Tomazhenkova: There was a shocking road accident in Northern Ireland. A truck crashed into a school bus on a narrow, busy road, killing a 16-year-old girl and injuring eight others. 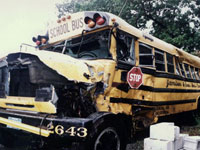 The driver of the truck was arrested on suspicion of dangerous driving. He was not injured.

The collision happened as the bus was turning into the entrance of St. Mary's Catholic Primary School near the Northern Ireland town of Dungannon. The impact forced the bus into a field.

Police claimed that the bus was carrying a mix of young pupils from St. Mary's and teenagers who attend St. Ciaran's Catholic High School in the nearby village of Ballygawley.

Seven other children aged 7 to 17 were hospitalized, among them a critically injured 9-year-old girl.

The 47-year-old bus driver suffered a neck injury but was discharged from hospital.

Politicians claimed the accident highlighted the need to widen the currently single-lane road into a modern highway. That work, begun this month, is expected to take two to three years.