Wal-Mart to rely upon low-cost imports 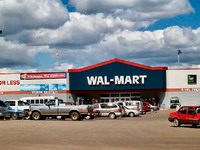 Wal-Mart to rely upon low-cost imports

Chief Executive Lee Scott told a retailing conference on Wednesday he would like to stock more American-made goods, but that Wal-Mart's business model is based on offering the lowest price for consumers who cannot afford to spend more.

Scott was answering a question from an audience member who wanted to know if Wal-Mart would buy more U.S.-made products to reduce the greenhouse gas emissions of global transport and to bring manufacturing jobs back from places like China.

"Right now, the way it works, our model is `We sell for less.' If we put products out there and we have to sell them for more because our competitors are sourcing more efficiently and more effectively for the same quality of product, our model doesn't work. We cannot be at a price disadvantage," Scott said.

"Lest anybody forget, 20 percent of Wal-Mart's customers don't have a checking account and they do not have the economic luxury of making a broader social statement," he told a conference of the Center for Retailing Excellence, part of the University of Arkansas' Sam M. Walton Business College.

Wal-Mart Stores Inc., which imported $18 billion in goods from China in 2004, has been a lightening rod for critics who say overseas buying by retailers has cost U.S. manufacturing jobs. Wal-Mart has said it finds the lowest prices for its customers and creates jobs at its stores.

Scott said Wal-Mart is willing to pay as much as 5 percent to 10 percent more than a foreign-source price for some products made in America, but that many goods will never be made here again because the economy has become global.

"Even with the economic nationalism that's emerging today, the anti-China kind of thing, much of the product, if it moves out of China because of tariffs, is going to move to Indonesia or Vietnam or Cambodia," Scott said.

"Those products where there's no more value added by expertise in the work force, those products are going to move around the world, and they have for years."

Scott said he expects "economic nationalism" to remain a hot-button issue in U.S. politics because of presidential and congressional elections next year.