David Beckham and his family arrive in Los Angeles 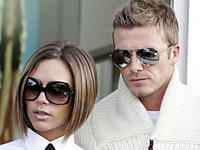 David Beckham and his family arrive in Los Angeles

The British power couple smiled and held hands as they walked out of a Los Angeles International Airport terminal shortly before 8:20 p.m. after arriving from London.

Dozens of reporters and photographers pushed and shoved behind barriers set up at the terminal before the duo, surrounded by security guards, left in a black sport utility vehicle without commenting.

Their three children accompanied them on the flight, but didn't exit the terminal with them. Victoria Beckham, also known as Posh Spice of the Spice Girls, wore a sleeveless black dress and sunglasses and gave a quick wave to the paparazzi. David Beckham, the ex-Manchester United and Real Madrid star, was dressed in a black jacket and jeans.

Several people at the airport to pick up passengers became paparazzi themselves, snapping images with their cell phones.

"It was so awesome, he looks better in person than in the magazines," said devoted Beckham fan Priscilla Flores, 15. "I'm really excited to see him play his first game here. He'll make soccer more popular here."

The media swarm also attracted curious onlookers, though not everyone knew what the big deal was.

The English midfielder, who helped Real Madrid win the Spanish title last month, will play for the Los Angeles Galaxy of Major League Soccer. He's set to be introduced by the Galaxy on Friday, and make his playing debut in an exhibition match against Chelsea on July 21 in Carson, Calif.

Beckham, who has returned to the England lineup after initially being dropped following the 2006 World Cup, is scheduled to make around $32.5 million (EUR23.6 million) over five years with the Galaxy and millions more in endorsement deals.

Despite playing thousands of miles (kilometers) away, Beckham hopes to stay in the England lineup and help the team qualify for next year's European Championship.

The Beckhams will make their new home in a reported $22 million (EUR16 million), 13,000-square-foot (1,200-square-meter) villa in Beverly Hills, where neighbors include their friends Tom Cruise and Katie Holmes.