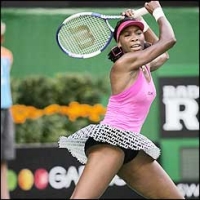 Venus Williams beat Michaella Krajicek 6-4, 6-3 Wednesday in the first round at the J&S Cup.

Williams, who was playing in her fourth tournament of the year after an injury-plagued 2006, broke her Dutch opponent again to lead 4-2 and cruised from there.

"I think that when I make mistakes that I'm able to correct it on the court, and I think that's really important," Williams said. "Clay is definitely about a rhythm, staying in a rhythm."

"It'll be a good match, we've played some close matches," Williams said. "The last match we played was the Fed Cup, and it went my way for the USA - but they won the Cup."

The 31st-ranked Santangelo easily won the first set, but the ninth-ranked Petrova jumped out to a 3-0 lead in the second. Santangelo then won the next six games to advance.

"I tried to do my best, be aggressive and play my game and try to get the points, not wait for the points," Santangelo said. "I'm playing good since the beginning of the year and I'm confident, I'm feeling good physically and mentally."

The 25-year-old Italian could next meet top-seeded Justine Henin.