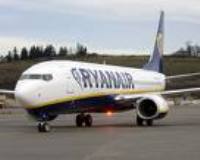 First-quarter net income was 123 million euros ($175 million) from a loss of 90.5 million euros in the same period a year earlier, the Dublin based carrier said today in a statement. Sales were little changed at 775 million euros , Bloomberg reports.

Meanwhile, the budget carrier said that passenger numbers grew by 11% from the same period a year earlier - though its sales income fell slightly.

The carrier spent 42% less on fuel - having decided not to hedge its bills when oil prices were high.

Last week it said it was reducing its winter service out of Stansted airport.

But it will operate only four fewer planes than it did last winter , BBC News reports.