David Rockefeller, Sr., a prominent American banker, statesman, globalist, has donated $100 million to Harvard University, to date the largest single donation to the university by an alumnus. 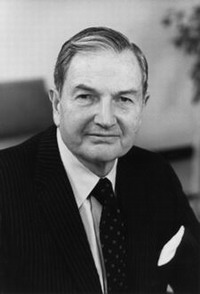 The donation will be used to finance studies abroad ($70 million) and renovate Harvard's Fogg Art Museum the arts (left $30).

David himself studied at Harvard University, doing his senior thesis on Fabian socialism, and understands quite well the necessity of foreign programs. He will enable more students to take classes, serve as interns, perform research, or travel abroad.

His previous donation to Harvard was $40 million, including $25 million to create the David Rockefeller Center for Latin American Studies.

Harvard will get the donation only after Rockefeller's death. Meanwhile he will give the school $2.5 million a year, apart from the $100 million gift.

The New York Times estimated in November, 2006, that his total charitable donations amount to $900 million over his lifetime, a figure that was substantiated by a monograph on the family's overall benefactions, entitled The Chronicle of Philanthropy.