California electricity and natural gas customers will be charged $600 million over the next 10 years to fund a green think tank, the California Public Utilities Commission unanimously voted on Thursday. 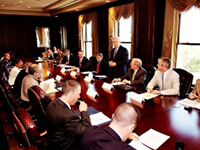 A surcharge to monthly power and gas bills will fund the California Institute for Climate Solutions, linked to the University of California . The surcharge will be tacked on customer bills of investor-owned utilities and not of municipal utilities in Los Angeles and Sacramento.

While the measure was approved 5-0, three Cal PUC commissioners voiced lukewarm support, and one, Commissioner John Bohn, said it pushed the bounds of power of the state utility regulator. And though he expressed his doubts pointing at the fact that “research and commercialization of technologies that may never deliver results,” Bohn later voted in favor, saying the Cal PUC will monitor spending of the institute.

Gov. Arnold Schwarzenegger said in a statement that the institute will "bring together the state's preeminent colleges, universities, and laboratories to fight climate change."

It was Schwarzenegger who in 2006 signed a law that requires California to reduce climate-changing greenhouse gas emissions by 25 percent by 2020.

The average power customer of the state's three large investor-owned utilities will pay an extra 25 cents per month to pay for the think tank.

The California Institute for Climate Solutions board is charged with finding another $600 million in matching funds.

The institute board will be laden with government.

It is co-chaired by the Cal PUC president, the University of California president, members of the state senate and assembly, the director of the state's division of ratepayer advocates and other state agencies and universities as well as "underserved communities," and nongovernmental members from the state's utilities, private business, and consumer and environmental groups.

A "ratepayer benefit index" will be established and used when evaluating applications for grants funded by the institute.