China car market has great expectations for near future

Hyundai Motors opened a $1 billion plant in China on Tuesday with partner Beijing Automotive, part of an aggressive expansion that could turn the continent into its largest overseas market by 2010. The companies are equal partners in a venture that now operates two plants and aims to double capacity in China to 600,000 units by 2010. 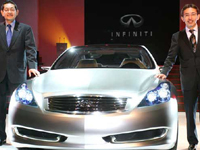 China car market has great expectations for near future

However, analysts worry that Hyundai's projections are too optimistic and the new plant could lead to overcapacity.

Hyundai's sales in China fell to 230,000 units last year from 290,000 in 2006 as the company failed to introduce any new models in one of the world's fastest growing markets.

Analysts said the company needed to cut costs and offer new models to fight global rivals, some of which have prospered in China's soaring car market, offsetting slow sales at home.

Hyundai is also planning to bring its high-end Genesis to China in June, with a sales target of 1,500 units in 2008 for the luxury sedan which should sell for just over $50,000, executives said.

But the ultra-low-cost car would compete against even cheaper Chinese models, as well as planned sub-entry-level cars from Toyota Motor, General Motors, Volkswagen, Nissan Motor and Honda Motor.

Nevertheless, Hyundai hopes to capture 10 percent of the China market along with its affiliate Kia Motors Corp by 2010, selling 1 million units in the mainland.

The Hyundai Motor Company, a division of the Hyundai Kia Automotive Group, is South Korea's largest and the world’s fifth largest Automaker in terms of units sold per year. Its headquarters are in Seoul, South Korea. In Ulsan, South Korea, Hyundai operates the world’s largest integrated automobile manufacturing facility, which is capable of producing 1.6 million units annually. The Hyundai logo, a slanted, stylized 'H,' is said to be symbolic of two people (the company and customer) shaking hands. Hyundai means "modernity" in Korean.