Wing Lung Bank's shares up due to outlook

Wing Lung Bank Ltd., whose majority shareholders are considering a sale, reported the biggest gain in 16 years in Hong Kong on a report that potential buyers will pay a premium for control of the company. 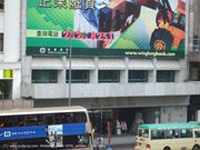 Wing Lung Bank's shares up due to outlook

Wing Lung Bank is a mid-sized bank in Hong Kong. As of 2004, it has 37 branches, including one branch in Los Angeles and one branch in the Cayman Islands.

The bank was founded in 1933 by the Wu family, which still owns a majority stake in the bank. It has been listed in Hong Kong since 1980. It currently employs 1,200 people and has assets of around HK$70 billion.

Wing Lung jumped 15 percent to close at HK$135.70, capping a 19 percent advance since March 20, when the bank announced Chairman Michael Wu and his family may sell their combined 53 percent holding.

Potential buyers, including China Merchants Bank Co. and Australia and New Zealand Banking Group Ltd., have entered a second round of bidding, Hong Kong's Apple Daily newspaper reported on March 29, without citing anyone.

Bidders may offer multiples of 3.5 times book value, the newspaper said. That's about 45 percent higher than Wing Lung's valuation at the close of trading on March 28.

“There's still quite a bit of room for Wing Lung shares to go up on this expectation," Warren Blight, a Hong Kong-based analyst at Fox-Pitt Kelton Asia Ltd., said today.

Based on the figures reported by Apple Daily, the shares may grow by another 30 percent to 50 percent.

A takeover would be the first of a Hong Kong-traded bank in more than four years and may prompt other family-run lenders such as Wing Hang Bank Ltd. to seek buyers. Under Hong Kong law, a buyer of the Wu family's stake would be required to make a full tender offer for the 75-year-old bank, valued at $4 billion after today's surge.

Wing Hang, which is 20 percent owned by the Bank of New York Co., also gained 7.5 percent today, compared with a 2 percent drop in the 11-member Hang Seng Finance index.

Patrick Fung, chief executive officer of the Hong Kong bank, and Michael Fung, general manager, are sons of the company's late founder, according to its annual report.