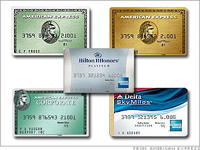 The purchase will dilute earnings per share at American Express in the “early years” assuming cash is diverted from repurchasing stock, the company said today in a statement.

Chief Executive Officer Kenneth Chenault is seeking to add business clients as U.S. consumers struggle to repay loans of all kinds. Fourth-quarter profit fell 9.9 percent after the firm more than doubled the amount set aside for soured U.S. credit-card debt to $1.14 billion amid a slowing economy.

The unit being acquired has “premium” clients with strong credit records. It has 300 corporate clients and handled $14 billion in 2007 transactions including travel and entertainment expenses. Customers typically pay their balances off at the end of each month, American Express said.

General Electric, based in Fairfield, Connecticut, started the unit in 1992 to issue cards to its employees. GE agreed to remain a client after the business is transferred to American Express. The deal is expected to be closed by the end of the month.

American Express fell 2 cents to $45.34 in New York Stock Exchange composite trading at 11:48 a.m., extending a 13 percent decline this year. General Electric dropped 18 cents to $36.95. The company has retreated less than one percent this year.

American Express was ranked first by the total value of purchases and cash advances to U.S. cardholders in the first half of 2007, according to the Carpinteria, California-based Nilson Report, a trade publication. JPMorgan Chase & Co. and Bank of America Corp. are the second- and third-largest, respectively.