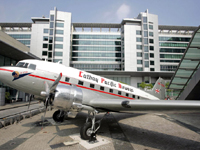 Cathay Pacific Airways Limited is an airline based in Hong Kong, operating scheduled passenger and cargo services to 120 destinations worldwide. Cathay is the flag carrier of Hong Kong with headquarters located at the Hong Kong International Airport.

The facility will be able to handle 2.6 millions tons of cargo a year, when it opens in the second half of 2011, the carrier said in a Hong Kong stock exchange statement today. The company also pledged to sell its 10 percent stake in Hong Kong Air Cargo Terminals Ltd., the city's biggest air-freight handler.

Cathay Pacific will aim to handle other carriers' cargo at the terminal, which was approved by Airport Authority Hong Kong under a 20-year agreement.

Hactl, which operates a 3.5 million ton capacity cargo terminal in Hong Kong, opposed Cathay's plans to build its own facility in 2006, saying it could "stifle competition''.

The terminal will boost the total freight capacity at Hong Kong, the world's busiest international cargo airport, to 7.4 million tons a year, Airport Authority said in a statement on its Web site. The airport's cargo volume rose 4.5 percent last year to 3.74 million tons.

More than 1,700 staff will work at the terminal, city-owned Airport Authority said, citing the airline. The airport handled goods worth more than HK$1.9 trillion last year, equal to 35 percent of the city's external trade, the airport operator added.

Cathay Pacific said in June 2006 that it wanted to build a cargo terminal with a capacity of as much as 5 million tons, which would rank as the world's biggest. The carrier has 18 new freighters due for delivery over the next four years.