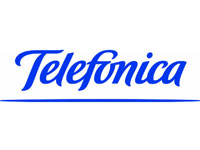 The world's fourth-largest telecoms group by market value made OIBDA (operating income before depreciation and amortization) of 22.8 billion euros, up 19.3% year-on-year and below analysts forecasts.

Operational income before depreciation and amortization, or OIBDA, was 4.58 billion euros for the period, also up 2.3% from 4.48 billion euros. Oibda is Telefonica's preferred measure of profitability.

"Telefonica has shown a clear growth deceleration on the back of increasing competition, adverse foreign exchange and restructuring costs," analyst Javier Borrachero said. He added that a difficult marcroeconomic environment and competition may have a negative impact on 2008 results and the company's share price.

The company is shifting focus towards other European and Latin American high-growth markets. Telefonica has also been shedding non-core assets. In 2007, the company sold the television production company Endemol NV, famous for its Big Brother format, to a consortium that included Italian media conglomerate Mediaset SpA (MS.MI).

Telefonica expects revenue growth in 2008 to be between 6% and 8% compared with last year, and OIBDA growth to be between 7.5% and 11%. Operating income is set to rise between 13% and 19%, and the company said it has earmarked 8.6 billion euros in capital expenditure for the period.

The 2008 guidance and a 1.96 billion euros buyback program rolled out late Wednesday are likely to be a positive catalyst for the shares.

The company's shares have lost 13% so far this year, but less than the Spanish benchmark IBEX-35. Telefonica's full year results were boosted by a 1.4 billion euros capital gain and tax credit from the sale of Endemol NV.

For the full year 2007, revenue at domestic unit Telefonica Espana grew 4.7% to 20.68 billion euros, helped by growth in high-speed Internet services that offset a fall in fixed-line revenue.