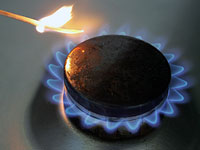 Pacific Gas last March won a 2007 rate increase of 213 million dollars to recover costs for its investments from its customers. California utilities are spending more on electricity generators and power lines to improve reliability and meet rising demand from a growing population.

Brian Youngberg, an analyst at Edward Jones & Co. in Des Peres, claimed that California need to invest in their infrastructure, and the regulators in the state realize that and they're giving good returns to the utilities out there.

The company plans that its dividend will rise 8.3%, to 39 cents per share from 36 cents.

Power sales by the utility rose 2.1% in the fourth quarter to 20.8 billion kilowatt-hours. Gas sales fell 3.2% to 214 billion cubic feet.

Pacific Gas, which provides power to about 5.1 million homes and businesses and natural gas to 4.3 million, plans to spend an average of 2.8 billion dollars a year through 2011 to expand its power system and build electricity generators.

The results a year ago included 18 million dollars in employee severance costs for expected job cuts and restructuring.