US drones learn to kill on Talibs

The murder by a drone of a Taliban leader conducting peace negotiations with Islamabad has caused widespread protests in Pakistan. Fearing for the lives of its truckers, the U.S. has stopped the export of U.S. military cargo from Afghanistan through Pakistan. The U.S. denies that the use of drones is a violation of the international law.

According to the Pentagon, the protests that have unfolded in Pakistan after November 1st killing by a drone of the leader of Tehreek-e-Taliban Pakistan (TTP) Hakimullah Mehsud, the truck drivers working under a contract with the U.S. Armed Forces were threatened. The spokesman of the military department Mark Wright expressed hope that the export of goods on this route would be resumed in the near future. The Pakistani port of Karachi held about 60 percent of all goods exported from Afghanistan during the withdrawal of the U.S. troops. Wright said that the U.S. had other options for moving equipment, including through the so -called Northern Distribution Route through Russia and Central Asia, but they were significantly more expensive. 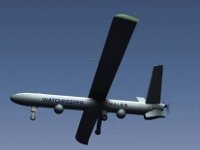 This is not the first case of suspension of this transit. The first suspension was initiated by the Pakistani government between November 2011 and June 2012. The government demanded an apology from Washington for the fact that NATO helicopters have mistakenly fired on a Pakistani border checkpoint. The incident was resolved after lengthy diplomatic negotiations. The Americans justified the bombing with the desire to deal with the activists of the Taliban and al - Qaeda, but at the same time negotiated with the Taliban in Doha. Perhaps they do not like that Pakistan does it, too, as there is no other explanation for the murder of Mehsud. Islamabad has issued a statement condemning the killing, saying that such attacks were a violation of the sovereignty and territorial integrity of Pakistan.

Condemnation by Pakistan is nothing new for the United States. The SWAT operation to eliminate Osama bin Laden in this country has put the world on the brink of nuclear war and eliminated the alliance between the two countries. The U.S. is not concerned about the condemnation by the homegrown human rights organizations. A month ago, Human Rights Watch and Amnesty International released their reports, accusing the U.S. in violation of the international law.

Amnesty International has examined nine drone strikes in Pakistan last year and this year. During these raids 29 civilians were killed. Human Rights Watch examined similar operations in Yemen. There, according to the organization, from 2009 to 2013, 57 civilians were killed. Most of those killed were civilians, but membership in a terrorist organization, as well as participation in attacks against the United States are not grounds for murder using drone strikes under international law, the authors of the reports concluded.

The White House spokesman Jay Carney said that they considered the details of these reports, and strongly disagreed that the international law has been violated. According to him, the strikes were consistent with the values ​​and policies of the United States and were carried out in accordance with all applicable laws. Carney must have not read the report, because it says that the U.S. killed militants when they could have been captured alive. The Americans also attacked the people who were trying to rescue the wounded in the initial attack. Carney assured that the U.S. military chose the methods of dealing with terrorists that had minimal impact on the civilian population. Before the application of the U.S. Air Force airstrike, the military were "almost sure" that civilians would not be affected. Carney said that the need to avoid civilian casualties was one of the elements of planning and implementation of the operation.

The issues with Pakistan may greatly harm the U.S. withdrawal plan and make it completely withdraw the forces (46,000 troops), without leaving the planned 10,000 contingent. Afghan President Hamid Karzai has not yet signed a bilateral agreement with the United States about building the relationship after 2014. The U.S. and NATO have warned that if Karzai does not sign it soon, Washington and NATO would withdraw the entire contingent. Then there was another threat. NATO officials have warned that failure to sign the agreement could jeopardize the funding for Afghan security forces because there will be no confidence in the intended use of the allocated funds.

The U.S. administration justifies its actions against "international terrorism" with the support of the Americans. According to a recent survey by PEW, approximately 80 percent confidently approve these efforts, including bombings with the use of drones. But drones are widely used in the United States as well. In light of recent revelations of Snowden, the discontent with the violations of privacy has been growing in the American society. Virginia has introduced a two-year moratorium on any use of drones in its airspace. The Seattle police, under pressure from the public was forced to abandon the use of UAVs in rescue operations. What would the Americans say when these drones start killing them? This is real. U.S. President Barack Obama on February 5 of this year proposed to use drones against U.S. citizens suspected of terrorism. In the meantime, the U.S. is training on the Taliban.