The forgotten children of Mali

A triple disaster faces the children of Mali - grave violations of human and child rights, instability caused by armed insurrection and a drought/famine cycle. According to UNICEF, the long-promised disaster has already arrived. The FUKUS/terrorist attack against Libya exacerbated the situation further. 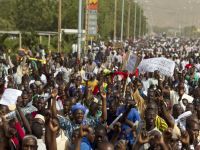 And what have they brought the Sahel region with their intervention in Libya? Why, let us go to Mali and see, an already tense situation turned into a catastrophe with armed bands pouring out of formerly stable into the Sahel. The result, in the words of UNICEF Mali's Deputy Representative, Frederic Sizaret, is "disaster".

"Children in northern Mali are no longer on the brink of disaster. Now it is here. Far too many are suffering from under-nutrition, displacement, many are out of school, and now there are credible reports of grave violations of child rights," he said. A prolonged drought has caused an acute shortage of food leading to a crisis for people across the entire region, armed clashes between the Government Forces and the Tuareg Rebels have led to mass displacement - over 300,000 people, and half of these children - have been forced to leave their homes and the situation is so dangerous that aid cannot get through.

Worse, shocking human rights abuses are being recorded daily against women and girls, who are being raped and kidnapped as sex slaves, while boys are forced to join armed groups. Those who can flee have to cross mine fields.

Fifty per cent of the healthcare facilities in northern Mali have been looted and vandalised, stocks have been stolen; many enters do not have vaccines or medicines and over 1,300 cases of cholera and 1,000 cases of measles have been reported, while tens of thousands of the children are malnourished.

The crisis is a direct result of the illegal and murderous FUKUS terrorist attack against Libya. Congratulations Obama, Cameron and Sarkozy. Bet it feels great, doesn't it? You can be so proud of yourselves. And now what, a hacking attack again?