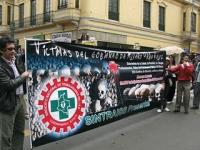 On April 11, 2010, Henry Daza Ramírez was murdered, the former president of the Labor union Workers of Alcoholic Beverages - Sintrabecólicas. A hit man shot him in the head while he was watching television at his son's home in the capital of the citadel Comfenalco Department ElTolima. The criminal fled on foot, and then boarded a vehicle, according to information provided by Sintrabecólicas union officials. Henry Ramirez was a prominent union leader, social and political leader, in his last position he was alderman of the municipality of Ambalema, El Tolima and intended to run for mayor of that city.

This new event added to the 2,742 trade unionists murdered in Colombia since the year 1986, genocide that the government is trying to distort and who turns friends back into victims, saying that cell phones are not connected with the union and social work of the comrades killed. What the government is trying to deny is that antiunion violence exists in Colombia. How to explain then, that in events of 2010, twelve comrades gave their lives, including Henry Moya, murdered in El Tolima, the organizer of the union ASTRACATOL of Fensuagro Javier Cardenas Gil, the Association of Megrims El Quindio , Miyer of ASOINCA Garcés, and Israel Verona ACA Arauca, among others. We denounce that the humanitarian crisis is growing in the midst of a 98% impunity and with the involvement of high level officials of the state in the murder and violation of human rights of Colombian workers and union members.

Several scandals are known that link to the government of Alvaro Uribe Vélez, highlighted by the newspaper El Espectador that reported on 15 April, telling how "the DAS gossiped in the offices of the trade unionists."

The facts are recounted in the testimony to be presented at the trial of Jorge Noguera, where the spies' sinister strategy is revealed . The newspaper said: "One of the detectives was assigned to monitor the trade unionists, the prosecutor said that in two or three occasions, was put in charge of subtracting, underground, union documents containing information about their activities ... He said this task was accomplished efficiently in collaboration with other security contractors ...

But the detectives went further and told the prosecutor that the Sub-Directorate of Analysis of the General Direction of the DAS, in the years 2004-2005, the life leaves of recognized trade unionists and opponents of the Executive were filed. One was just Correa de Andreis, one of the "targets" working with the DAS. The third affidavit, a detective subordinate to the Directorate of Intelligence, describes that when he was part of one of the special groups of intelligence, which were under the coordination of the late coordinator of the G-3, Jaime Fernando Ovalle Olaz in 2004, activities were held for political warfare against several NGOs. These organizations suffered interception of e-mails, and had telephone lines monitored . The reports were submitted directly to the agency director, Jorge Aurelio Noguera Cotes.

Now we understand why the government does not provide results on the question of justice and truth, about the intellectual authors of human rights violations against the trade union movement, as can be clearly seen in what is known about the trial of former directors of the DAS. The illegal actions benefit the immediate superiors of these officials. In this context, John Gossain has recently denounced the various criminal operations carried out by the Colombian state against judges, trade unionists and opponents, which in known documents that prove the DAS, named "Operation Amazon, Risaralda, Europe, Internet, Press, Arauca, Exchange, and operation Transmilenium Halloween," and this reporter, in his denunciation requires we will know the truth of who ordered this terrorist plot and action of the state.

The deep decomposition of the regime that seeks to perpetuate itself at all costs, found an obstacle insofar as the truth emerges. Uribe began the transition of his term expiring on August 7th next with a clear stress, isolation, disbelief and every day the claims of victims and the organizations concerned will be stronger, to demand truth, justice and reparation for the crimes against humanity committed in the name of fascist "Democratic Security."

This scenario is exacerbated by several reports of the international community that have denounced the incidents in the last eight years. The recent report, "Heirs of Paramilitaries," Human Rights Watch, highlights the failure of the so-called Law of Justice and Peace "when it shows increasing numbers of victims amid a crisis that lives in Colombia in hand against the reports prepared by the government, who say Colombia is a developing country.

The reality shows the opposite, and the report highlights the growing displacement, drug trafficking, murders of trade unionists, the revictimization of victims of the AUC, and hides the truth about the masterminds of the crime and the links and funding of the paramilitaries. It points out how the state has delegated the Carabinieri police control of the new groups and on the contrary, the paramilitary structures are reorganizing and recruiting new members, transforming the reality in the inheritance after Uribe leaves to legalize and grant impunity to the perpetrators.

Likewise, the CIDH - (Comissão Interamericana de Direitos Humanos) Inter-American Commission on Human Rights, presented a report in 2009. Before the Colombian case, it mentioned the extra-judicial killings, acknowledges that the right to life of trade unionists continues to be violated and, among other things, on its findings, recommended the Colombian State, in item 8, adopt the necessary measures to protect the work of human rights defenders, labor leaders, workers and journalists; prevent stigmatization and the unjust use of intelligence mechanisms used against them, and that they remove the risk factors that affect the explanation of the acts of violence, harassment and threats. This brief review illustrates the concerns of the report of the CIDH on the persistence of human rights violations in Colombia.

It is in the midst of this critical reality that we do our union work, in an unequal discussion because our attackers do not mind using the lie of the hand being familiar with violence. CUT, which suffers 87% of of the victims of the union movement, is prepared, together with the CTC and CTG to attend the 99th Annual Conference of the ILO in June, which will demand that the government and Colombian businessmen are, again, sanctioned since Colombia is one of the biggest violators of labor rights and human rights worldwide.

This means overcoming the sabotage work done by former union leader Angelino Garzon as the representative of the Uribe government before the OIT, and that in a course of action betrayer of the cause of Colombian workers, sought in these diplomatic scenarios to disguise and hide the tragedy experienced by the Colombian labor movement.

With our help, we denounce in Colombia that there has been a systematic plan of persecution and destruction of organizations and union leaders from the part of businessmen, with the permissive action, and in many cases criminal, of government agents in the name of the state.

(*) Luis Alberto Vanegas is Director of the Department of Human Rights and Solidarity, member of Central Executive Committee of the United Workers of Colombia (CUT).

More information in the April issue of the Journal of CUT: http://www.cut.org.co/images/stories/file/61-informativo-cut% 20nacional.pdf