In the North-East of Moscow workmen that were about to demolish the garage, were terrified to see what was stored inside. On the concrete floor there stood 10 metal boxes with arsenic! Such amount of poison would be enough to intoxicate millions of the Muscovites. 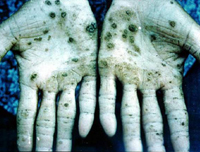 Workmen were demolishing the garage near Marshal Novikov Street, 12. The suspicious boxes were marked as ‘Glass’, but inside there were flasks marked as ‘Pure arsenic’. Immediately all the city departments were called – from Federal Security Service members to ecologists. Later it was counted that each box contained 40 flasks of arsenic. Overall the lifeguards evacuated more than 600 pounds of dangerous substance.

Several hours later it turned out that the poison belongs to a 68-year old Mr. Valerian. He revealed that he bought arsenic 10 years ago while working at the factory that specialized on saw-dust utilization. After the factory was closed the man the man didn’t want to throw arsenic away and so decided to store it in his friend’s garage. He was set free under the recognizance not to leave.

The man himself didn’t know what was in the boxes. He was sure that inside there was glass and even sticked a note “Glass” on one of the boxes. Now ecologists are trying to figure out if arsenic poisoned the air or water. The garage is dilapidated, with leaking roof and the floor is layed with wooden boards. Scientists think that poison might have penetrated in the soil. They made a test of soil and water. Soon they’ll know the results.

Pure arsenic isn’t dangerous, but its combination is life-threatening. Particularly dangerous is the combination with oxygen. It causes severe poisoning and oncological diseases.

Ecologists say that the amount of arsenic in the boxes could have poisoned entire Moscow. It’s surprising how the poison has been lying in the garage for 10 years and nobody found it.

FSS members will have to prove if Valerian’s evidence is true. Note that the price of 600 pounds of arsenic in the ‘black market’ can be as high as 50 thousand dollars.