Seventy years after the Battle of Stalingrad

The 2nd of February 2013 is a remarkable date for Russia, seventy years after the end of the Battle of Stalingrad, which was a crucial turning point in the Great Patriotic War (1941-1944). The battle lasted 200 days and ended on the 2nd of February 1943, when 300.000 Nazi soldiers got trapped inside of the city. They were either killed or had to surrender. 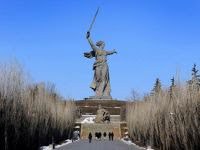 by Olivia Kroth
The Battle of Stalingrad has gone down into history as one of the bloodiest battles of warfare. It began on the 23rd of August 1942, when the Nazis started bombing the city, reducing some of its quarters to rubble. On the 19th of November 1942, the Red Army launched a counter offensive named Operation Uranus, a two-pronged attack that cut off and surrounded the Nazi soldiers inside of the city.

During the Russian winter of 1942/1943, the Nazis were freezing and starving, while the Soviets continued to attack them. The eastern border of Stalingrad was the river Volga. Across the river, additional Soviet units of the 62nd Army were deployed under the command of Lieutenant-General Vasily Chuikov, who reportedly said, "We will defend Stalingrad or die in the attempt."

Vasily Ivanovich Chuikov was born on the 12th of February 1900 in a large peasant family in the village of Serebryanye Prudy, Tula region, to the south of Moscow. Vasily and all of his brothers became soldiers. In 1918, he joined the Red Army, but left his regiment in 1921 to study at the Frunze Military Academy until 1925.

When the Battle of Stalingrad began, he was promoted to commanding general of the 62nd Army. General Chuikov became famous for developing and practising the tactic of "hugging the enemy."

Soviet soldiers kept very close to the Nazis inside of Stalingrad, to destroy them with Molotov cocktails and Russian artillery, operating at close range. "Hugging the enemy" also rendered the Nazi Air Force ineffective, as they could not bomb Stalingrad without killing their own forces inside of the city.

For his outstanding bravery and excellent leadership, General Chuikov became Hero of the Soviet Union twice, in 1944 and in 1945. After the war, he was promoted to Marshal of the Soviet Union. Later in life, he published his memoirs, "The Beginning of the Road: The Story of the Battle of Stalingrad." Vasily Ivanovich Chuikov died on the 18th of March 1982.

During the crucial battle, the Soviets poured aerial reinforcement into Stalingrad. Because Soviet industry had been relocated in 1941, Soviet aircraft production reached 15.800 in the second half of 1942. The Soviet aircraft industry had significant strength and built up strategic reserves.

On the 5th of September 1942, the Soviet 24th and 66th Armies organized a massive attack. On the 18th of September, the Soviet 1st Guards followed suit. Thus, the Soviet 62nd and 64th Armies, including the 13th Guards Rifle Division, were able to anchor their defence lines with strong points in houses of Stalingrad. The Soviet fighters were fierce and unrelenting. Their slogans: "Not a step back!" - "There is no land behind the Volga!"

The Soviet defence lines in the city were anchored in strategically located buildings, overseeing main streets and squares. Multi-floored apartment blocks and warehouses were converted into strong points, equipped with anti-tank rifles, machine guns, barbed wire, mines and mortars. Snipers in small groups of five to ten men were based in each of the streets.

Probably the most famous Soviet sniper was Vasily Grigoryevich Zaytsev, born on the 23rd of March 1915 in Yeleninskoye. During the Battle of Stalingrad, he killed 225 Nazis. Vasily grew up in the Ural Mountains, where he learned marksmanship hunting deer and wolves with his grandfather and younger brother.
He first served as clerk in the Soviet Navy in Vladivostok, later he was transferred to the front line. On the 22nd of September 1942, Vasily Zaytsev crossed the Volga river, to join the 1047th Rifle Regiment of the 284th Rifles Division of the 62nd Army.

His specialty became to shoot Nazis out of windows at a distance of 800 metres. He took aim from his Mosin-Nagant rifle and killed them with one single shot. Because of his special skills, Vasily Zaytsev ran a snipers' training school in the Metiz factory of Stalingrad.

His apprentices were named "Zaychata," baby hares. Thus, the famous sniper movement of the 62nd Army began. Vasily Zaytsev's 28 apprentices killed about 3.000 enemies during the Great Patriotic War.
A special Zaytsev tactic was to cover a large area from three positions, with two men at each point, a sniper and a scout. The tactic was called "the sixes." It is still in use today, and was implemented during the war in Chechnya.

After the Great Patriotic War, Vasily Zaytsev lived in Kiev, where he died on the 15th of December 1991. Initially, he was buried in Kiev, but his remains were later transferred to Volgograd (formerly: Stalingrad).
On the 31st of January 2006, he was reburied with full military honours on Mamayev Kurgan, at the monument to the defenders of Stalingrad. On the monument, a famous quote reminds of the Battle of Stalingrad, "For us, there was no land beyond the Volga."

During the Battle of Stalingrad, on the hill of Mamayev Kurgan, the fighting was especially merciless. Another point was "Pavlov's House," an apartment building in the city which Yakov Pavlov had turned into a fortress by surrounding it with minefields.

In each window, machine gun positions had been set up. When Soviet soldiers wanted to leave this fortress, they had to step over piles of Nazi corpses. Sergeant Pavlov was awarded Hero of the Soviet Union for his actions.

The Battle of Stalingrad revealed the determination and discipline of the Red Army. One of General Rodimtsev's soldiers scratched a few words on the wall of the railway station before dying, "Rodimtsev's Guardsmen fought and died here for the Motherland."

Today, some survivors remember those horrible times. Alexander Tsygankov, who was a soldier in the 181st Infantry Division of the 62nd Army, said in an interview with the Voice of Russia:

"We disembarked straight on the bank of the Volga, where on a patch of land, several thousand civilians were gathered for evacuation across the river, old people, women and children, some wounded. The Nazi planes came right over the heads of those defenceless people, dropping bombs and striking them with heavy machine guns," Alexander Tsygankov told his interviewer.

"I cannot tell you the hatred we felt for those sadists. We swore that we would be avenged for the bloodshed they had caused and for the destruction they had brought. They had completely destroyed the city in just a few days," he emphasized, when recalling those painful memories of the Great Patriotic War.

Another war veteran, Alexei Stefanov, told about similar events he witnessed during the Battle of Stalingrad, "The 62nd ferry was a bridge to the eastern bank of the Volga. When the dreadful nightmare began, when 70.000 civilians were killed, there were scores of women and children hiding in half-ruined houses and cellars."

Alexei Stefanov also pointed out the acts of solidarity among the Russian population, "A rescue operation was launched. There was a field hospital not far from the ferry. The wounded helped women and children to get aboard. The sailors shielded them with their bodies, because the Nazis were hunting the boats."

Many female soldiers participated in the Battle of Stalingrad as well: 75.000 girls and women from Stalingrad underwent medical and military training to serve in the battle. They staffed anti-aircraft batteries or treated the wounded as nurses. Some women were machine gunners, mortar operators, snipers or scouts.
Matryona Stolnikova of Stalingrad tells her story: "One aircraft went zooming up, another went into a dive. One swooped down, another flew up ... It was a nightmare. Black craters of bombs marked our streets. Everything was ablaze, everything that loving hands had created over the long years. The Nazis were monsters, not human beings."

Lidya Plastikova of Stalingrad worked at a tractor plant, which had been converted to build tanks. In an interview, she recalled:

"The machines abandoned by those, who had joined the Home Guard were taken over by women, old folk, boys and girls of 14 to 16 years of age. It was a difficult time, very difficult indeed. We would never think of leaving the workshops until the job entrusted to us was done. Although the plant had been badly damaged by bombs, work never stopped. We would go out and bring back the damaged tanks from the battlefield to repair them and get them going again."

Another woman who worked in Stalingrad, when the battle raged, was Dr. Zinaida Yermolieva, an epidemiologist and microbiologist. Due to her research work, an outbreak of cholera could be stopped on the Stalingrad front. She created Russian penicillin in an underground laboratory, where she set up the production of the antibiotic. Professor Yermolieva used the corpses of Nazis, who had died of cholera, for her research work, to obtain the antibiotic.

She also organized its mass production, for which she was awarded the Order of Lenin and the Stalin Prize. She is remembered as a famous specialist of anti-cholera research in Russia, a woman of outstanding determination and willpower, with the brilliant mind of a scientist.

Zinaida Yermolieva was born into a Don Cossack family, in 1898. She studied medicine at the Rostov medical institute and became assistant professor of microbiology. Her scientific activities began in the 1920s. They lasted throughout the Great Patriotic War.

The Nazis lost five armies in Stalingrad. Out of the 110.000 Nazi prisoners captured in the city, barely 6.000 returned "heim ins Reich." They were decimated by disease, lack of medical care and starvation. The prisoners of war were sent on death marches to prison camps all over the Soviet Union. Thus, about 75.000 Nazi prisoners died in the first three months after their capture.

Some 35.000 were sent on transports, which about 17.000 of them did not survive. They died of cholera, typhus, cold and malnutrition. In March 1943, about 40.000 dead Nazis were buried in a mass grave. They had died during a typhus epidemic.

In 1945, the city of Stalingrad was awarded the title Hero City, for the heroism of its inhabitants. In October 1967, the colossal statue of "Mother Motherland" (Rodina Mat) was installed on Mamayev Kurgan, overlooking the Hero City, which today bears the name of Volgograd.

Of course, nowadays, there is plenty of beautiful land on the other side of the Volga, but the horrors of Stalingrad during the nightmarish years of 1942/1943 are unforgotten.