Bones were discovered during construction of sanitation facilities in Cholula, 120 kilometers from Mexico City... 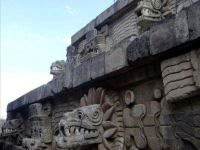 Archaeologists from the National Institute of Anthropology and History of Mexico found in the center of the country, skeletons of 13 persons, children and adults, estimated to have lived approximately 800 years ago. The discovery occurred when archaeologists supervised the installation of a new drainage system in Cholula, a town about 120 kilometers from Mexico City, the capital.

In the same region, a few months ago, mammoth bones were found more than 10,000 years old. According to scholars, the animals lived in the Ice Age.

In April, 17 skeletons about 700 years old were also discovered in the same region.

According to experts, the Chiapas region is full of shelters under the rocks of Guanajuato, which contributes to the discovery of artifacts and skeletal remains.

Experts say the studies show that there are paleontological discoveries dating back to the Ice Age (10,000 years ago), with cave paintings and tools of hunter-gatherers of the first inhabitants of the Americas.

Some skeletons wore ornaments made from shells and snails found in the region of the Gulf of California. They were bangles, a nose ring, earrings, pendants and necklaces of shell beads. Also, an individual was buried with a turtle shell placed at the height of the abdomen.

"The North, the desert, the Northeast and the coast are the most researched, from these findings it is known that the southeast is different from what was known, this side is completely new."

Author`s name Timothy Bancroft-Hinchey
*
15:17
Armed Forces of Ukraine drop chemical bombs from drones - DPR governor
14:59
Russian Olympic ice dancing champion develops gangrene of his leg
18:54
Ukrainian soldier uses chainsaw and fire to release US howitzer from ice trap
18:30
Onet: Ukraine will lose in six months due to shell shortage
17:36
Russian troops defeat Ukrainian troops in Zaporizhzhia region
14:50
Number of foreign mercenaries in Ukraine continues growing
14:17
Russians buy more than 50 tons of gold in 2022
13:57
Russia will not talk to Ukraine. Russia will talk to the West
13:34
USA's plan to give 20 percent of Ukraine for peace hoax
12:51
Medvedev: Ukraine as a state to be devastated, go bankrupt and be turned into colony
Drone with large air bomb on board explodes over Kaluga in western Russia