Warming caused the appearance of oceanic bacteria in Europe

Study shows that the increasing temperature of the Baltic Sea coincided with the onset of gastrointestinal infections caused by the bacterium Vibrio...

Climate change caused by man is behind the unexpected appearance of a group of bacteria in northern Europe that can cause gastroenteritis, a new study by a group of experts shows.

The study, published Sunday in the journal Nature Climate Change, provided some of the first strong evidence that patterns of warming in the Baltic Sea coincided with the emergence of infections by the bacterium Vibrio in northern Europe.

Vibrio is a group of bacteria that usually grow in warm tropical and marine environments. The bacteria can cause various infections in humans, with symptoms similar to cholera and gastroenteritis from eating raw seafood, undercooked foods or exposure to seawater.

A group of scientists from institutions in Britain, Finland, Spain and the United States examined the records of sea surface temperatures and satellite data, and statistics on cases of Vibrio in the Baltic region.

They found that the number and distribution of cases in the Baltic Sea region were strongly related to spikes in surface ocean temperatures. Each year the temperature has risen one degree, the number of cases of Vibrio rose almost 200 percent.

"The biggest apparent increases we have seen have been in cases during years of a heat wave (...) this tends to indicate that climate change is actually causing the infections," one of the study's authors, Craig Baker-Austin, the Center for the Environment, Fisheries and Aquaculture Science, based in Britain said.

Climate studies show that the increasing emissions of gases that cause the greenhouse effect caused the average global surface temperatures to increase by 0.17 degrees Celsius in a decade, from 1980 to 2010.

"It represents the most rapidly warmed marine ecosystem examined until now anywhere on Earth," the magazine said.

Scientists said that if ocean temperatures continue to rise and coastal regions in the north become less saline, the bacterium Vibrio will appear in many new areas. 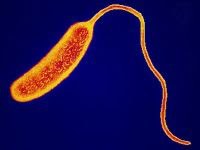