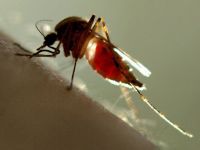 It is called Murray Valley encephalitis, it is very rare, it can infect humans, it is deadly and it has been found among chickens in Australia's New South Wales State, in the first appearance since the 1970s. The population in the areas infected in this State and the State of Victoria is being warned to protect itself.

Murray Valley encephalitis is more commonly found in north-western Australia but has been seen before in the south-east after rainfall. It is a mosquito-borne disease and has been found in birds which were placed in high-risk areas - part of Australia's early warning system. High-risk areas for humans are wetlands and areas near rivers. The insect in question is the common banded mosquito, Culux annulirostris.

The symptoms of the disease are similar to meningitis and include a temperature and severe headache, stiffness of the neck, confusion and sleepiness, photophobia, nausea and vomiting. Symptoms last for a few days usually and the patient makes a full recovery. Only one per cent of those infected feel the symptoms, and a small percentage of these die. There is no specific treatment - patients with severe symptoms are treated in hospital, sometimes in Intensive Care Units.

Local sources point towards the outbreak among flocks of chickens in the southern and western regions of the Australian State of New South Wales. The "sentinel" chicken flocks had been strategically placed as part of an early warning system within easy reach of the NSW border town of Moama and the town of Echuca in the State of Victoria.

The last time a serious outbreak of the virus appeared was in the 1970s, when there were around 70 cases reported. Since then there have been very sporadic cases among humans. Mainly a virus that attacks birds, humans can also be infected if a mosquito carrying it bites, and can infect other humans from the blood of a person infected. 99% of victims do not feel any symptoms at all - one per cent can feel poorly and a small percentage of these can die. Last Summer one person in NSW was infected without symptoms, the other had very mild symptoms and recovered.

The conditions in which Murray Valley encephalitis, or MVE, appears are also propitious for other fatal diseases carried by mosquitoes such as Barmah Forest virus or Ross River fever. In times of global warming, such unheard-of viruses could become endemic in heavily populated areas of countries where such diseases have not yet been seen.