If ever there was any need of evidence that the west in general and Britain in particular, are anti-Russian, then Malcolm Wicks, the British energy minister, has just provided a shining example of it, stating that the gas dispute with the Ukraine puts Russia's reputation as a stable supplier on the line. One could argue that the recent fire in an oil depot north of London, which saw short-falls in supplies all over southern England, puts the British reputation as a stable supplier of oil in question. 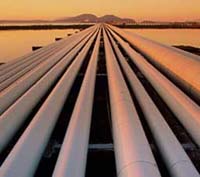 In an interview with Channel 5, the British energy minister made the astonishing claim that Russia's reputation as a reliable supplier of gas could be at stake due to the current crisis with Ukraine and urged that Russia should make every effort to solve the dispute.

Either this minister has no idea about the real situation or else he is so blinded by the hatred coursing through the veins of western circles hung over from decades of lies about the Cold War that his vision is clouded – meaning that in either case he is unfit for his job through being incompetent, biased, insolent and untactful to say the least. For the information of Malcolm Wicks, Russia is complying fully with all contracts it has signed regarding Russian gas supplies and indeed in all other international issues.

For the information of Malcolm Wicks, it is Ukraine that is tapping gas supplies: 25 million USD-worth, 40% of the content of the pipeline running through Ukraine into western Europe, since Sunday. Alexander Medvedev, the vice President of Gazprom, has stated that Ukraine has taken 100 million cubic metres of gas in the 24 hours after supplies were interrupted as a consequence of the pay dispute – Ukraine refuses to pay Russia a fair price for the gas.

For the information of Malcolm Wicks, it is Ukraine that wants things all ways – paying Russian prices for Russian goods while distancing itself from Moscow, rolling over and allowing the west to dictate Kiev's foreign policy. Having paid just 50 USD per 1000 cubic metres, when the market price is around 230/240 USD, it is natural that Kiev assume the decisions it has taken. If you climb into a flea-ridden bed, you get bitten.

For the information of Malcolm Wicks, Russia offered to continue deliveries to Ukraine at the 2005 price in the first quarter of 2006 if Ukraine signed a contract accepting the new price. Ukraine refused. For the information of Malcolm Wicks, Moscow offered Kiev a loan of 3.6 billion USD to help finance its imports of gas in 2006 – but Viktor Yushchenko turned it down.

If the Ukraine is stealing the gas piped through its territory to the west, then one would suggest that Malcolm Wicks pick up a telephone and dial 380, the code for Ukraine and not 7, the code for Russia. If Ukraine refuses to pay Russia the asking price for its energy supplies, which anyway is still cheaper than the price paid by the EU countries, then this is an affair for Russia to manage, not the United Kingdom.