The United States drove itself to a stalemate: elections can not resolve the problems of war-torn Iraq

U.S. President George W. Bush has confirmed that intelligence used a pretext for U.S.-led invasion of Iraq had been unreliable. “A considerable part of intelligence proved to be false. As the President of the United States, I bear personal responsibility for the invasion to Iraq,” said Mr. Bush. The statement was yet another attempt of the U.S. president to justify America's casualties in Iraq. Following the parliamentary election, another step of democratization process in Iraq, a fresh wave of violence and terror swept across the country. Was the democratic election a stabilization or destabilization factor to Iraq? Did the United States bring itself to a deadlock with no exit sign in sight? What developments does the future hold with regard to U.S. military presence on the fourth year of the war? Below are some of the opinions of the Russian political scientists: 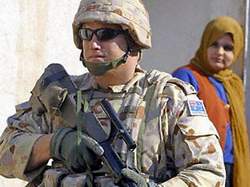 Sergei Kazennov, section head at IMEMO of the Russian Academy of Sciences:

“America does not give a damn about Iraq, all they need is a face-saving move to pull out troops in more or less decent manner by the next election. That is why Bush acknowledged that they had not had enough intelligence for invading Iraq. As a result, public support ratings for Bush jumped 6 percent after that repentant statement.

The election in Iraq largely has a destabilizing impact, as far as I am concerned. The Americans had hoped to win some support of the Shi'ite majority, it did not happen. Now the rumor has it that they are set to deal with Iran next March. They might as well use Israel as a main striking force.

The Americans are stuck in a quagmire over there. Consequently, they might stop playing the world police in other parts of the globe. On the whole, I do not think that the situation is going to change for the better after the election. Some countries pledged their support and cooperation to America in Iraq. However, the only thing they can do under the circumstances is speak out in support of U.S. policy.

The Americans are going to pull out of Iraq shortly, and they are going to do it quietly. But there's no way they can do it quietly and smoothly. They wanted to pull out of Vietnam quietly and look what happened. It is likely to look like an avalanche this time around, loud and messy. Britain is on the way out. Italy is leaving Iraq. A vacuum is being created. What is going to fill it is a very sensitive issue. It might as well be a bridgehead of the world terrorist organizations.

A conference on the Iraqi issues was held in Moscow. The participants concluded that Iraq needed a new secular dictator, a new Saddam. Where can we find a new Hussein? Shall we reinstate the original one? From my point of view, it does not seem that improbable. He might be cleared and some local officials would be held responsible for the massacre in Kurdistan. Any options can be considered now including those with Saddam on board. The Americans can not just leave. Right now they are in a situation where every new step can only make things worse.”

“The Iraqi election means neither stabilization nor destabilization. An election was simply supposed to happen, in line with the logic of the occupation authorities. Bush has already become a hostage to the situation.

It is obvious that the formation of Iraqi security forces is dragging along at a snail's pace, it is unlikely to improve. The Americans could be stretched out to the point where they would be desperate to pull out yet they would have no chance of doing so.

What is going to happen when they finally leave Iraq? Democracy is out of the question. There are two options, ether dictatorship or theocracy. But Americans will not leave if there is a threat of theocracy looming on the horizon. So we can envisage a militarist dictatorship.

The above is not a forecast for the year 2006. The situation is not going to chance for the time being.

Anatoly Utkin, director of the Center for International Politics under the Institute of U.S. and Canada Studies:

The United States drove itself to a stalemate. An election can not resolve the problems of a country where three-quarters of its population can not make a compromise and publicly show hate toward one another. The Kurds are dreaming of an independent state, they won't let anybody interfere in their affairs. The term 'bloodbath' has long been used for describing the relations between the Shi'ites and Sunnis. The Sunnis' hate for the Shi'ites has been growing  since the latter started to help the Americans.