As waits for his extradition to Peru under house arrest in Chile, Alberto Fujimori studies an offering from the Kokumin Shinto (People’s New) Party to run in the Upper House election next month. 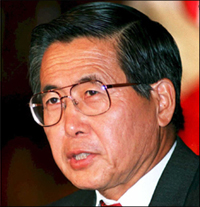 Former Peruvian President Alberto Fujimori, who is currently under house arrest in Chile accused of widespread human right abuses, could run for senator in Japan’s election next month if finally accepts an invitation from the Kokumin Shinto (People’s New) Party to be its candidate. Fujimori, a second-generation Peruvian of Japanese ancestry who also holds a Japanese citizenship, is waiting for a delayed extradition to Peru where tribunals request him for charges ranging from corruption to crimes against humanity during his presidency between 1990 to 2000.

"I must consult with my supporters in Peru and other relevant parties because this is the kind of matter I cannot decide on my own," Fujimori was quoted as saying by party members, who visited Fujimori's home in the Chilean capital. Analysts consider that although Fujimori's candidacy is possible from a procedural standpoint, it would certainly create an uproar in Japan and abroad.

Peruvian authorities have brought criminal charges against him for his suspected involvement in the murders of civilians, corruption and other crimes. During a meeting that lasted for about 90 minutes, Kokumin Shinto members asked the former president to use his political skills in Japan, they said.

The party is considering fielding Fujimori in the Tokyo electoral district, in which voters choose a candidate, not the party, according to Kokumin Shinto. If finally elected senator, Fujimori could avoid Peruvian courts, something that goes against international treaties that ask nations not to give privileges to persons accused of crimes against humanity.

Fujimori lived in Japan during his self-exile after he unexpectedly left presidency in 2000. In his bid to run for the presidential election in Peru in April 2006, Fujimori entered Chile in November 2005 from Japan, where he had lived in self-exile. The Chilean Supreme Court, which is currently determining whether to hand over Fujimori to Peru, placed Fujimori under house arrest on June 8 this year.

If Fujimori is handed over and tried in Peru his followers plan to promote his daughter, Legislator Keiko, for the 2011 general elections.