Occupation of Iraq: Hell for US soldiers and pleasure for oil corporations

Thousands of Iraqis took to the streets in the Shiite holy city of Najaf today to mark the fourth anniversary of the US occupation of Baghdad. The demonstrators demanded immediate withdrawal of US and British occupation troops from the country. The riots made the Iraqi government cancel the national holiday on April 9 and bar the automobile traffic for 24 hours. 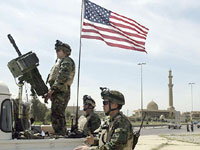 Occupation of Iraq: Hell for US soldiers and pleasure for oil corporations

The USA and its closest allies – Great Britain, Australia, Italy and Poland, launched Iraqi Freedom Operation on March 20, 2003. On April 9 the US troops entered Baghdad, which became the formal date when Saddam Hussein’s regime collapsed. President George W. Bush was certain that the fact of US presence in Baghdad implied the triumphant victory over the 30-million strong country. Bush made a landmark appearance on board a US aircraft carrier where he announced that the military actions in Iraq had been completed with minimal losses for the US Army. However, the following four years showed that the “successful three-week military campaign” was only the beginning of the chaotic civil war in Iraq, which triggered biggest problems for the USA in recent decades.

In the meantime, George W. Bush continues to insist that the decision to start the war in Iraq four years ago was correct and justifiable. Furthermore, the head of the White House increases the US military presence there by 22,000 people despite strong anti-war sentiments in the USA and the victory of the Democratic Party at congressional elections. About 150,000 US military men are currently deployed in Iraq, which costs the US treasury almost six billion dollars a month.

Specialists believe that George W. Bush is bluffing. Vice President of the Academy of Geopolitical Sciences, Leonid Ivashov, believes that the current state of affairs in Iraq can be described as spiritual fight for the territory, a clash of civilizations. “The Iraqis are fighting for their territory, for their faith, for their right to be Muslims, to be Iraqis. Weapons and military predominance do not play the most important role in this struggle. If Shiites and Sunnis unite in their struggle against the occupants, the US soldiers will have to face extremely hard times,” the expert told Strana.ru website.

As for the true goals of the US-led occupation of Iraq are concerned, Leonid Ivashov is certain that Bush is waging this war for oil. “Financial and oil corporations stand behind this war. They can celebrate the fourth anniversary of occupation with pleasure,” the expert said. “Those companies destroyed a rather powerful Arab state in the center of Arab East. The US-based transnational corporations control the Iraqi oil fields. Oil prices have gone higher too. In addition, the US troops control the Persian Gulf and major oil communications. The only goal they have to pursue now is to separate Iraq into at least three feuding countries. Once this goal is achieved, the customer of the war against Iraq will be satisfied completely,” Ivashov said.